At long last, the Ryzen 5000 series has arrived, and as expected, it "sets a new performance bar," as Marco notes in his review of the Ryzen 9 5950X and Ryzen 9 5900X. Check it out for all of the delightful details, complete with a bevy of actual (read: not leaked!) benchmark results. As for overclocking, we saw some modest results, but someone was able to crank the Ryzen 9 5950X all the way to 6GHz across all 16 cores.
That is nothing short of spectacular. To recap the specs, the Ryzen 9 5950X is AMD's new flagship consumer desktop processor, with 16 cores and 32 threads. Out of the box, it has a 3.4GHz base clock and 4.9GHz max boost clock, along with 8MB of L2 cache and 64MB of L3 cache, and a 105W TDP. And it's a *bleeping* beast.
Let's start with our own overclocking results. Marco attempted all of the overclocking modes available within Ryzen Master (PBO, AutoOC, and Manual). He was not shooting for the moon, and instead took a conservative approach, aiming for a sort of worst case scenario, using a Wraith Prism air cooler. Trying to run 4.5GHz across all cores at 1.4v proved unstable, but 4.35GHz at 1.25v ran just fine.
This yielded around a 15.5 percent increase in the Cinebench R20 mult-threaded test compared to stock settings, and around a 4.3 percent gain in the 3DMark Fire Strike Physics test. Good stuff, but certainly there is headroom for extreme overclockers to do their thing, and push the limits with exotic cooling.
Case in point, an overclocker named ROG-Fisher achieved a remarkable and CPU-Z validated 6.03GHz all-core frequency. Have a look... 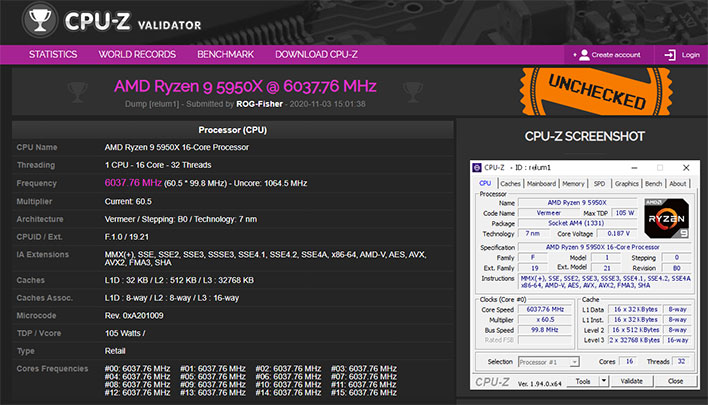 This raises the question, is Marco even trying? I kid, I kid! There are not any details about the cooling used in this all-core overclock attempt, but you can bet it was not achieved with a Wraith Prism cooler, or any type of air cooler for that matter. We are almost definitely looking at results obtained with liquid nitrogen (LN2), as is fairly standard in the realm of extreme overclocking.
The rest of the test-bed consists of an ASUS TUF Gaming B550M-Plus motherboard, a single 8GB DDR4 module, and a 250GB T-Force SSD. Rather tame stuff, but outside of having a capable motherboard, the rest of the components are basically along for the ride.
ROG-Fisher hit the insanely high OC by bumping the multiplier to 60.5, which yielded a 6,037.76MHz all-core clockspeed. Incidentally, this is around the same speed (a tad faster, actually) that was spied earlier this month in a Geekbench listing, which purportedly showed a Ryzen 9 5950X running in a Mac Pro.
In any event, this is fun stuff (though not practical, obviously), and it will be interesting to see what kind of extreme OCs follow, now that the Ryzen 9 5950X is more broadly available.