Drivers contracted to make delivers for Amazon claim that special cameras installed in their delivery vans are unfairly dinging them for road violations that did not occur, resulting in loss of extra income and other bonuses that they might otherwise be eligible to receive. Amazon, meanwhile, says the cameras have led to fewer accidents and less instances of distracted driving.
Amazon earlier this year partnered with Netradyne to install the camera systems into Amazon-branded delivery vans. Called "driveri," these are more than simple cameras. They're quad-camera systems with four HD lenses, including one that faces the road, another that faces the driver, and two side lenses that collectively provide 270 degrees of coverage.
As part of the initiative, contracted drivers are required to sign a biometric consent form, basically acknowledging and agreeing to the surveillance setup. Amazon says it is intended to support drivers by helping them be "safer on the road and handling incidences if and when the happen." The problem, some drivers say, is that they are being penalized for things out of their control.
Speaking to the folks at Motherboard, drivers voiced a number of complaints with Amazon's biometric cameras, one of which is that the AI-infused cameras mark them down when another driver cuts them off, which can lead to loss of income and bonuses.
"Every time I need to make a right hand turn, it inevitably happens. A car cuts me off to move into my lane, and the camera, in this really dystopian dark, robotic voice, shouts at me," one of the drivers explained. "It's so disconcerting. It’s upsetting, when I didn't do anything." 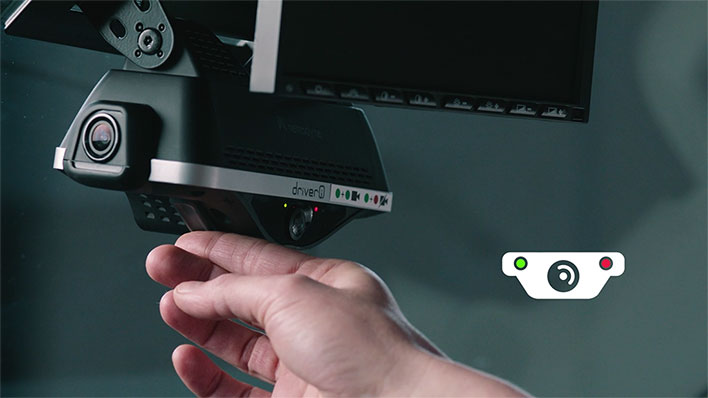 Everything is based on a scoring system. Drivers are marked down for different infractions, like looking down at their smartphones or failing to stop completely at a stop sign. In the case of the latter, a driver in Oklahoma claims it is the source of the majority of false positives.
"Either we stop after the stop sign so we can see around a bush or a tree and it dings us for that, or it catches yield signs as stop signs. A few times, we've been in the country on a dirt road, where there's no stop sign, but the camera flags a stop sign," the driver said.
Some drivers have taken to stopping more than once at a stop sign—one time for the benefit of the camera, and a second time so they can see around corners before crossing an intersection. Meanwhile, there are delivery quotas to meet.
Drivers receive a rating of Fantastic, Good, Fair, or Poor based on what the cameras picked up, and then the contracted delivery company is issued a rating based on all of its drivers, which determines if they receive extra income or not.
One of the criticisms being levied is that the cameras and their incessant verbal alerts actually serve as a distraction, rather than assisting drivers with being safer. However, an Amazon spokesperson told the site that since installing the cameras, accidents have decreased by 77 percent and incidences of distracted driving have dropped 75 percent.
The spokesperson also says Amazon has seen drops in stop sign (48 percent) and signal (77 percent) infractions, and driving without a seatbelt has gone down 60 percent.
It's an interesting situation, and from the outside looking in, it seems like the pressure to meet delivery quotas is at odds with appeasing an AI camera system every step of the way. Like taking the time to buckle and unbuckle on a quite neighborhood road where a driver might make multiple stops/deliveries in short order.
At the same time, if there are fewer accidents, then an argument can be made that the system is working, at least partially. Even though accidents are down (according to Amazon's data), there could still be false positives and other distractions at play, which hopefully will get sorted out.