Digital assistants are everywhere these days, even on your face, should you purchase a pair of Amazon's new Echo Frames. For the time being, they are only available to purchase by way of an invitation. Make no mistake, though, Amazon would be thrilled if millions of people ultimately decided to don a set of Echo Frames.
One thing these glasses have going for them is a rather conservative design. Smart devices built for our heads tend to be geeky (or dorky, depending on your perspective), like Snapchat's Spectacles (even the ones that are supposedly more stylish). From what we can tell, however, the Echo Frames look like a regular pair glasses.
They're not regular, though. Echo Frames are a persistent gateway to using Alexa, Amazon's digital assistant, everywhere you go. Amazon's promotional video offers up several ideal examples of where and how this might come in handy. Have a watch...

The video shows a conductor inspired by the beat of rain on his car, who instructs Alexa through his Echo Frames, "Alexa, remind me to try a faster tempo when I get to work." And in another scene, a dad carrying his daughter on his shoulders says, "Alexa, turn on the patio lights" to reveal a surprise birthday party (and also to remind us that Alexa can control our smart devices).
These idyllic demonstrations are common marketing fodder for these types of things, but are there really masses of people who care to have Alexa sitting in standby through a pair of glasses? We don't know, but Amazon aims to find out. 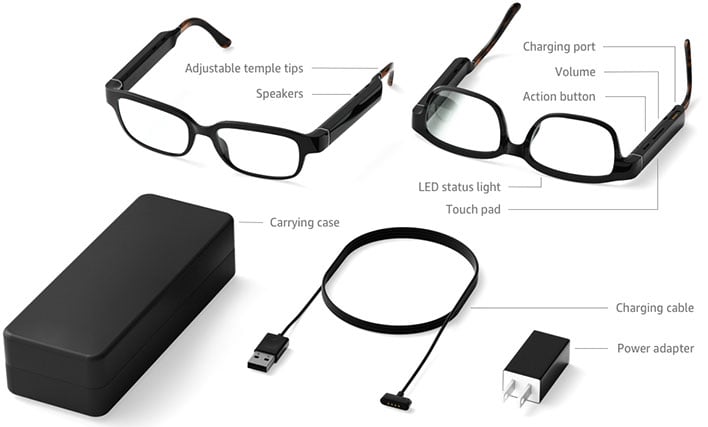 There are no cameras on the Echo Frames, because this is not an augmented reality (AR) device. There are two beamforming microphones that respond to the voice of the person wearing them (which can also be turned off by the user), and speakers with "open-ear technology" to discreetly direct sound the wearer's ears. Amazon also says you can still hear the world around you.
Other technical doodads include a capacititve touch sensor, ambient light sensor, and accelerometer, along with an LED status light.
According to Amazon, Echo Frames deliver a "day of intermittent usage" at 60 percent volume. In case you are wondering, Amazon defines intermittent usage as 40 Alexa interactions, 45 minutes of music, podcast, or other audio playback, 20 minutes of phone calls, and 90 incoming notifications over a 14-hour period. Otherwise, a fully charged battery will last for up to 3 hours of continuous audio playback, also at 60 percent volume. It takes 75 minutes to fully charge the Echo Frames.
Pricing during the introductory period is $179.99. After that, it jumps up to $249.99. If you are interested, you can hit the link in the Via field below and punch the Request an invitation button (you need to be signed into your Amazon account).