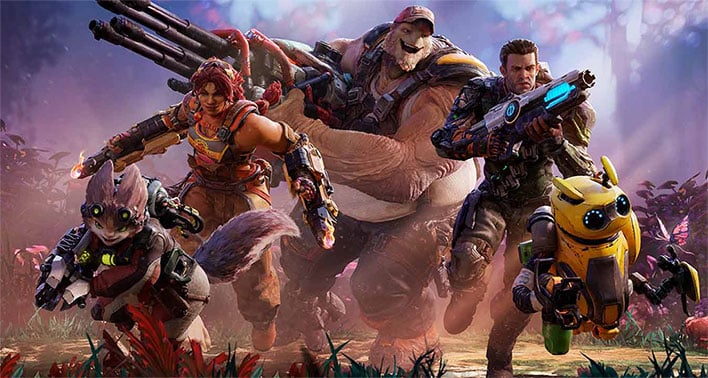 After several years of development, Amazon Game Studios is close—very close—to launching Crucible, a free-to-play team-based player-versus-player (PvP) action shooter. It will go up against some stiff competition, namely Overwatch and Valorant, the latter of which is currently being tested in a closed beta and due to release this summer.
Crucible will land on Steam in a couple of weeks, on May 20. In anticipation for the upcoming launch, Amazon Game Studios posted a 'First Look' video of Crucible to YouTube. It's only 1min40sec long, but depicts some actual gameplay footage and tidbits about what players will do in the shooter, as well as what characters will be available.
Have a look...

There will be three different game modes. They include Heart of the Hives, a four-on-four race to capture hearts left behind by monstrous hive creators; Alpha Hunters, in which two players team up to be the last hunters standing; and Harvester Command featuring two teams of eight competing to control Essence Harvesters.
"Crucible is a free-to-play team-based action shooter where your gameplay is defined by the choices you make. Pick a hunter and join a match. You’ll need to coordinate with your teammates, take advantage of your hunter's unique upgrades as you level up, and adapt to the ever-changing conditions of battle," Amazon Game Studios says.
There will be 10 hunters to chose from, each with their own unique set of abilities. How it stacks up remains to be seen. Reactions to the YouTube video above have been mixed—at the time of this writing, it has 67 likes and 44 dislikes.
"Okay this actually looks good," one user wrote. Another stated, "I'm noping outta here."
What are your thoughts and expectations for Crucible? Do you think you'll end up playing it? And liking it? Sound off in the comments section below!