It has barely been two and a half months since Amazon introduced a new generation of Fire HD 8 tablets with upgraded hardware and features, and they are already on sale. Rather than looking at spending $89.99 and up, which is a relatively affordable starting price for a tablet, today's crop of deals drops the cost of entry to just $59.99.
Affordability is what the Fire HD 8 family hangs it hat on, making them excellent budget alternatives to Apple's iPad mini. Sure, it is a bit of an apples to oranges (and Apple to Android) comparison, with different platforms, ecosystems, and performance levels between the two. However, the aggressive pricing on the Fire HD 8 line raises the question of whether it's truly worth spending a few hundred bucks more on an iPad. 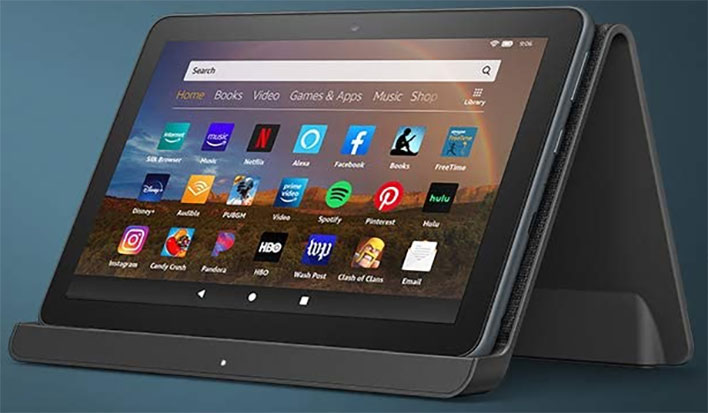 Here are the tablet configurations that are on sale on Amazon...
You can also find these same discounts on Best Buy, if you prefer. And if you want the versions with 64GB of onboard storage, those are also marked down $30 across the board.
These are the latest generation Fire HD 8 models. They still rock a quad-core processor like the last generation, but the chip is clocked at 2GHz instead of 1.3GHz. The latest models also get a small bump in RAM, and twice the amount of storage on the base model (which can be expanded via microSD).
Amazon's Fire HD 8 tablets offer a 1280x800 resolution. That is much lower than the iPad mini, though respectable for a budget alternative. They also have a USB-C port for charging, and a claimed 12 hours of mixed use battery life (browsing the web, watching videos, listening to music, and so forth).