The inevitable Galaxy Z Fold 3 and Galaxy Z Flip 3 will soon be upon us from Samsung. Samsung launched its second-generation folding smartphones last year, and this year's crop of third-generation devices is highly anticipated.

Images of both the Galaxy Fold 3 and Z Flip 3 have appeared in what looks to be leaked marketing materials from Samsung. While the photos look like they were taken with a potato phone that had Vaseline smeared on its lens, we do get a relatively good look at the rear camera module for the Galaxy Z Flip 3 with three sensors arranged vertically.

But the rear cameras aren't the most exciting thing here; the marketing materials confirm that the Galaxy Z Fold 3 will have an under-display selfie camera, which we first saw with the ZTE Axon 20 5G. Finally, we see the smartphone being used with an S Pen. The S Pen used to be relegated to Samsung's Galaxy Note family, but the South Korean company extended its availability to the Galaxy S21 Ultra earlier this year. Now that S Pen availability is expanding, rumors allege that the Galaxy Note family won't be long for this world.

Switching gears to the Galaxy Z Flip 3, the smartphone rocks a two-tone finish with dual vertically-stacked cameras on the rear. There's also a larger Cover Display situated beside the rear camera module. You can see updated renders of the devices based on the leaked promo materials within this article (Galaxy Z Fold 3 at the top, Galaxy Z Flip 3 directly below). 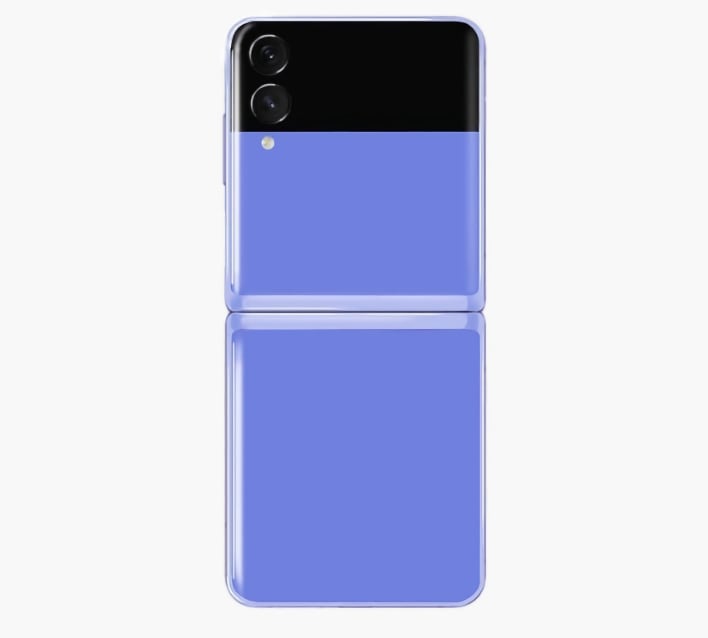 When it comes to specs, nothing is known about the smartphone at this time. However, it's widely expected that both phones will either use the Qualcomm Snapdragon 888 SoC or its successor (perhaps the Snapdragon 888 Plus, or whatever it ends up being called). We can also expect the yearly bumps in RAM, available storage, display sizes, battery capacity, and camera quality.

Samsung is one of the few manufacturers dabbling in the folding display segment, with its only main rival being Motorola with its reimagined Razr. LG bailed out of the smartphone market altogether, so we won't be seeing any of the company's intrigued unreleased concepts hit the market. TCL has also expressed interest with several folding smartphone concepts, but has yet to release them for the consumer market.