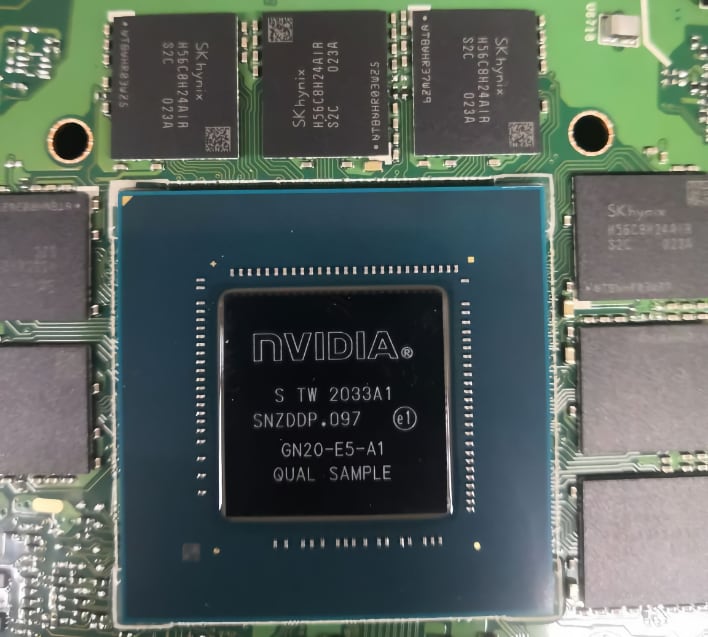 For the past few weeks, the gaming community has been in the middle of Ampere mania, as NVIDIA released both its GeForce RTX 3080 and GeForce RTX 3090 to the public (although availability was an issue for most people). It’s understandable that supplies would be tight, however, considering that the GeForce RTX 3080 delivers roughly twice the performance of the GeForce RTX 2080 at the $699 price point.

While NVIDIA clearly has its eye on the [desktop] ball at the moment, we know that laptop variants of Ampere GPUs will eventually be incoming. Thankfully, today we’re getting our first alleged look at a qualification sample for the GeForce RTX 3070 Mobile courtesy of @9550pro via Twitter. The chip is labeled GN20-E5-A1, which according to previous rumors is based on the GA104 GPU.

Clustered around the GPU are a number of GDDR6 modules from SK Hynix (H56C8H24AIR), which total up to 8GB using a 256-bit memory bus.

At this point, we have received no indication as to when NVIDIA plans to release its GeForce RTX 30 Series, or how many SKUs will be available at launch. However, we could possibly see something around CES 2021, around the same time when Intel could possibly be ready to launch 11th generation Tiger Lake-H processors.

With that being said, the next launch on NVIDIA’s calendar is the desktop version of the GeForce RTX 3070, which is coming later this month (possibly October 15th).