Acer has announced a bunch of new notebooks and desktops aimed at the gaming crowd and those looking for thin & light machines for portability. The first of the machines falls into the Thin & Light category and is called the Swift 5. Acer touts the machine as its newest ultrathin-and-lite notebook that features next-generation Intel Core processors.

The Swift 5 features Intel's 11th generation Core (Tiger Lake) processors with onboard Xe graphics, and can be fitted with an optional NVIDIA GeForce MX 350 GPU. Despite the powerful hardware inside the machine, Acer is still able to keep it under 2.2 pounds and only 0.59-inch thick. The computer maker also designed the Swift 5 with a touchscreen that features an Antimicrobial Corning Gorilla Glass covering to help kill germs that commonly collect on touchscreen devices. The touchscreen also has ultra-narrow bezels with a 90% screen-to-body ratio. Availability for the Swift 5 is set for October, starting at $999.99. 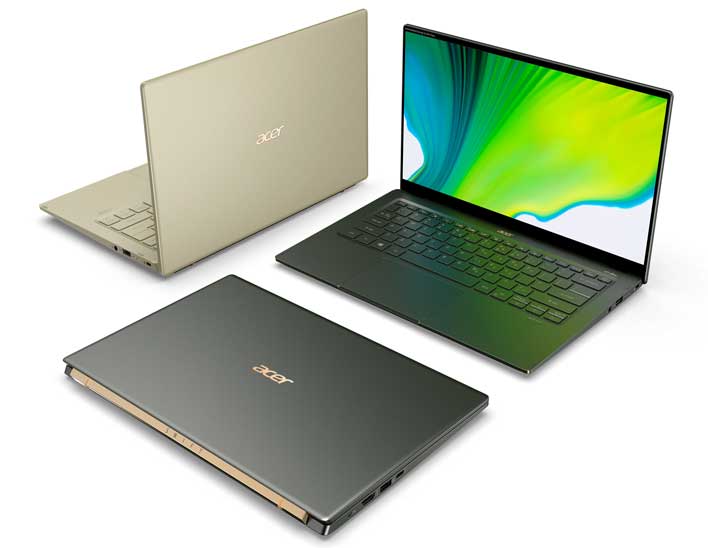 On the gaming notebook front, Acer has the Predator Helios 700 gaming notebook that has a very cool sliding HyperDrift keyboard. That unique keyboard slides forward by several inches when the lid is opened to reveal the cooling fans underneath to help keep the high-end hardware inside cool and make it easier for users to type. The machine has been upgraded to either an overclockable 10th generation Intel Core i9-10980HK or i7-10875H processor. GPU options include an NVIDIA GeForce RTX 2080 SUPER or RTX 2070 SUPER. Versions of the notebook with the Core i9 processor get a new thermal solution called Predator PowerGem. This machine will be available in August and starts at $2399.99.

Acer's Predator Helios 300 gaming notebook is also updated to use the latest 10th generation Intel Core H-series processors along with an overclockable NVIDIA GeForce RTX 2070 with Max-Q Design, a display with a 240 Hz refresh rate, and three heat pipes for the cooling system. Despite being a gaming class notebook, it's very thin and light at 0.78-inches thick and 4.63 pounds. The Helios 300 will launch in September, starting at $1299.99.

The Nitro 7 is the last of Acer's updated gaming notebooks measuring 0.78-inches thick and weighing 5.51 pounds. It features upgraded 10th generation Intel Core H-series processors and up to a GeForce RTX 2060 GPU. Its display is a 15.6-inch non-glare full HD IPS unit with a refresh rate of 144 Hz and 3ms response time. It launches in October for $999.99.

On the gaming desktop front, Acer has refreshed both the Predator Orion 9000 and Predator Orion 3000 PCs. Orion 9000 gaming desktops can be fitted with up to an Intel Core i9 Extreme Edition CPU and up to dual NVIDIA GeForce RTX 2080 Ti graphics cards in SLI mode. Orion 3000 buyers will get a mid-sized tower gaming rig with up to a 10th generation Intel Core i7 and a GeForce RTX 2070 SUPER GPU. The updated gaming rigs will launch in North America this September, starting at $999.99. 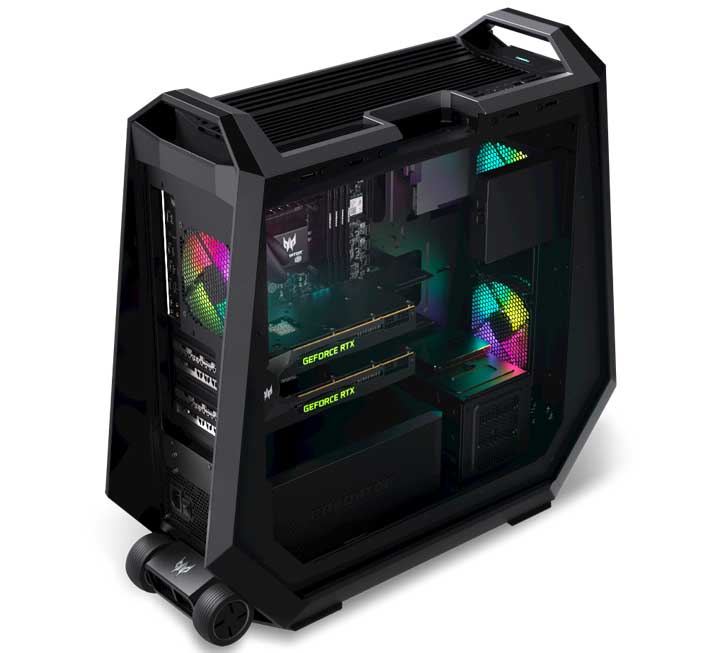 Acer also has refreshed Nitro 50 gaming desktops aimed directly at entry-level mainstream gamers with a wide range of configuration options that will start at $799.99 when they launch in September. This machine features 10th generation Intel Core i7 processors and up to a GeForce RTX 2060 SUPER GPU. Both the gaming desktops feature new Predator FrostBlade cooling systems.

While these Acer machines are only getting official today, the Acer Swift 5 laptop did leak last weekend ahead of its official announcement.