Acer continues its barrage of product announcements at the Consumer Electronics Show with a new ultra-portable additions to its Swift X laptop range and two Aspire all-in-one (AIO) desktops, all with Intel's latest-generation Alder Lake hardware inside. These join an array of new products that include updated gaming laptops, updated gaming desktops, new Chromebooks, and new monitors.
The newest Swift X models are available in 14-inch (2240x1400) and 16-inch (2560x1600) form factors. Acer's 14-inch Switch sports a thin aluminum frame that is only 0.7 inches thick, and weights a manageable 3.09 pounds. Meanwhile, the 16-inch variant is nearly as svelte with the same thin profile, it just weighs a tad more at 3.95 pounds.
Both sizes cram up to a 12-core Alder Lake processor inside a thin frame, and surround it with up to 16GB of LPDDR5 memory. For graphics duties, the 14-inch model leans on NVIDIA's GeForce RTX 3050 Ti, while the larger 16-inch model leverages Intel Arc graphics in discrete form. That's intriguing, though unfortunately Acer is not going into details about the discrete Intel GPU.

The rest of the configuration is pretty much the same: up to 1TB of PCIe SSD storage, Wi-Fi 6E connectivity, and a 59Wh battery. 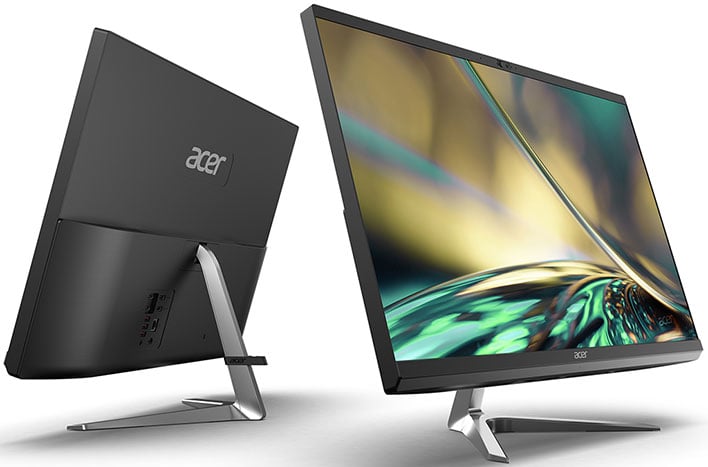 Acer also unveiled a couple of AIO desktops, the Aspire C27 (27-inch display) and C24 (24-inch display). These also feature Alder Lake hardware on the inside (up to a Core i7 chip), paired with up to a GeForce MMX550 discrete GPU.
It's not built for gaming, as you can probably surmise, though is reasonably balanced. Outside of the CPU and GPU hardware, you're looking at up to 64GB of DDR4 memory in dual-channel configuration, up to a 2TB PCIe 3 SSD,  Wi-Fi 6E + Bluetooth 5.2, Thunderbolt 4, a 5MP webcam with two stereo microphones, and Windows 11.
Pricing and availability for the Swift X, Aspire C27, and Aspire C24 will be announced at a later date.