This Ridiculous 5G Signal Blocking USB Stick Is A Complete Scam, But You Knew That 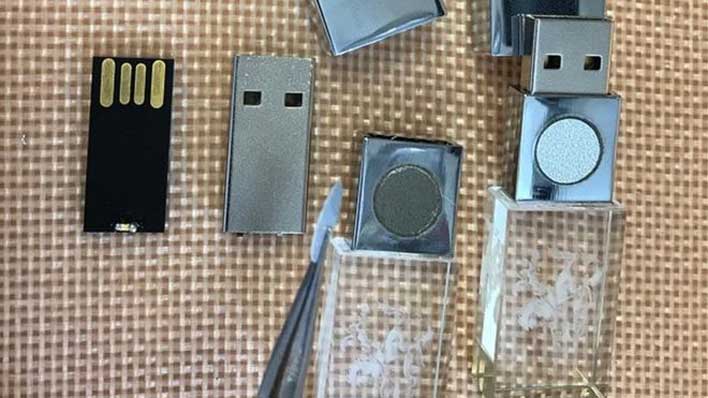 A 5G "blocking" device called 5GBioShield is being sold in Europe for £339, which is about $418 here in the United States. The device claims to block 5G signals that some people fear contribute to the spread of COVID-19, among other things. The bizarre device claims to use a "holographic nano-layer catalyzer" to block the alleged dangers of 5G using mysterious quantum technology.

If your BS detector isn't completely pegged, it should be.

Stephen Knight, operations director for an organization called London Trading Standards, recently told the BBC that "we consider it to be a scam." Knight is currently working with the city of London Police's Action Fraud squad and is seeking a court order to take the company's website offline. Knight added that vulnerable groups need protection from this sort of "unscrupulous trading."

The 5GBioShield device is from a company called BioShield Distribution, and it claims that the device is backed by research. Pen Test Partners, a company that specializes in disassembling consumer electronics to look for security vulnerabilities, investigated the device. After disassembling it, the group found that it seemed to be just a basic USB key with only 128MB of storage.

The only difference between the 5GBioShield device and a "virtually identical crystal USB key" that's available from suppliers in China for around £5 appears to be a round sticker, according to the investigators. Ken Munro from Pen Test Partners says that while the team is not "5G quantum experts," the sticker attached to the drive looks "remarkably like one available in sheets from stationery suppliers for less than a penny each."

The device appears designed to play on fears of some in Europe about the effects of 5G signals have on people, and the spread of coronavirus. In fact, some 5G engineers in Europe have received death threats from people who believe 5G causes the coronavirus. Some in the UK have even taken fears of 5G to the extreme by destroying 5G towers out of fear that the towers contributed to the pandemic.

In the immortal words of Forrest Gump - "stupid is as stupid does." Don't buy this thing, unless you want to pull a proverbial stupid and waste your money. It certainly won't protect you from anything.