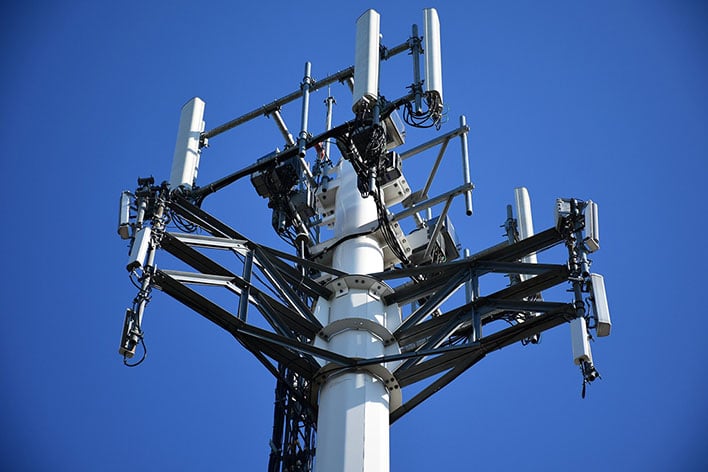 Over the years, conspiracy theorists would have us believe the moon landing was faked, there are aliens at Area 51 (I'm not entirely willing to rule this one out), and that Elvis Presley is alive and well, perhaps reminiscing with Tupac about living in the spotlight. Here's one more to add to the pile—5G cell towers are somehow responsible for spreading COVID-19, according to the latest ridiculous conspiracy theory making the rounds. Even worse, it seems some people are setting 5G cell towers ablaze in a horribly misguided, dangerous attempt to end the Coronavirus pandemic.
We're not making this stuff up. This is happening in the United Kingdom, and there is a video of a burning cell tower making the rounds on YouTube and Facebook, with claims there is some sort of link between 5G radio transmissions and COVID-19. The UK Government Department for Digital, Culture, Media, and Sports (DCMS) said "there is absolutely no credible evidence" of a link, and called claims to the contrary "crackpot conspiracy theories."
"We have received several reports of criminal damage to phone masts and abuse of telecoms engineers apparently inspired by crackpot conspiracy theories circulating online. Those responsible for criminal acts will face the full force of the law," DCMS stated on Twitter.
It is not just random posts on Twitter and Facebook, either. UK communications regulator Ofcom issued a warning to a community radio station (Uckfield FM) for "potentially harmful statements about the Coronavirus" made by a guest that was identified as a "registered nurse."

5G causes coronavirus because it’s sucking the oxygen out of your lungs, according to a video being spread on Facebook. I want to 😂 but the fact people believe this bullshit is genuinely scary pic.twitter.com/kY3g5MJtu9

"What 5G actually does is absorbs oxygen and that's really important to know. So, on your oxygen molecules, the little electrons with 5G, they start to like, oscillate, so this 5G is absorbing the oxygen and then your hemoglobin can't take up the oxygen. So how long do you think it is going to take the human body to fall over because it suddenly cannot take up oxygen into cells?," the guest stated.
She goes on to state that 5G was rolled out in Wuhan, where the Coronavirus is believed to have originated from, shortly before the spread of COVID-19.

These claims lack scientific evidence, obviously. Along with the burning of 5G cell towers, the claims also prompted a response by Cabinet Office minister Michael Grove, who called them "dangerous nonsense." NHS Director Stephen Powis added to Grove's comments, saying he is "absolutely outraged and disgusted that people would be taking action against the infrastructure we need to tackle this emergency."
"This is not acceptable and only impacts on our ability as an industry to maintain the resilience and operational capacity of the networks to support mass home working and critical connectivity to the emergency services, vulnerable consumers and hospitals," Powis said.
For anyone who is interested, the UK's independent fact checking charity, Full Fact, posted information about the two primary claims fueling the conspiracy theories—that 5G might suppress the immune system, and that viruses can communicate through radio waves. In no uncertain terms, the fact checking site notes, "neither of these theories is backed up by evidence."

We'll also offer our professional opinion here that this whole notion and conspiracy theory is just plain and simple crazy talk, and dangerously misguided at that. It is also worth noting that COVID-19 is spreading in places that do not have 5G networks, including parts of the UK and Iran, the latter of which had the sixth-highest number of reported cases and the fourth-highest number of deaths.