NVIDIA launched the GeForce RTX 3060 Ti today, and it offered some serious competition for the legacy GeForce RTX 2080 Super in our review.  It is a beast of a card, and for only $399 to start off, it is a killer deal. If you are not into NVIDIA's reference design, however, you have plenty of other options from some of the company's board partners which we have rounded up for you below.

The Strix line of GPUs is notorious for being ASUS' top-end part with every graphics card launch, and this pattern is not set to change. ASUS took the wraps off the ROG Strix GeForce RTX 3060 Ti (pictured up top) to beat out the nine other graphics cards that launched alongside it from the manufacturer. This particular card takes the beefiest-in-appearance category for ASUS as it has three fans and a 2.9-slot footprint. To match the beefy look are equally beefy specs, as this thing can boost up to 1860MHz making it great for gaming at 1080p and 1440p. 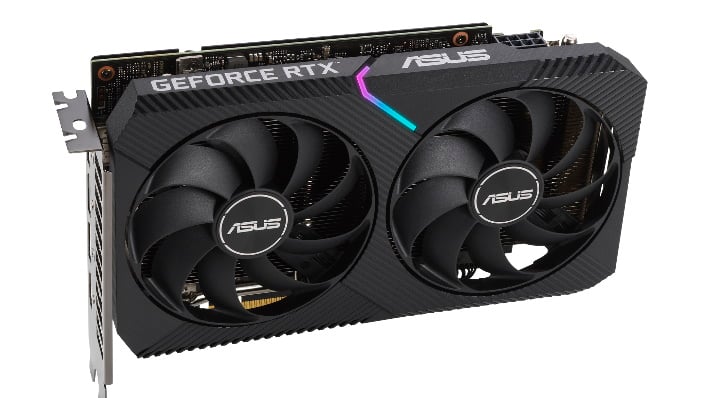 This card is the littlest brother or runt of the bunch from ASUS, depending on how you look at it. ASUS claims, however, that it has a "Compact Design with a Mighty Thermal Performance." It was designed and built for small form factor systems, coming in under 20cm in length. However, do not be fooled by its small size as it is the motion of the GPU ocean that counts. They often say that great things come in small packages and we can't complain with the results that ASUS if offering up here. 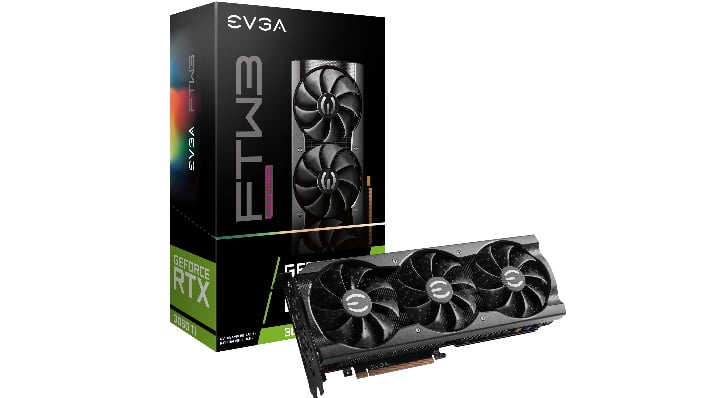 On the EVGA side of things, the For The Win 3 (FTW3) edition is the top-end part for each GPU SKU from EVGA. The company has pulled another launch off with a new FTW3 card, and this one is slick looking. It is a mostly all-black design featuring three fans and a 2.2-slot form factor with some RGB lights for color and taste. This GPU should boost up to 1800MHz and hopefully will stay cool with EVGA's iCX3 cooling technology. 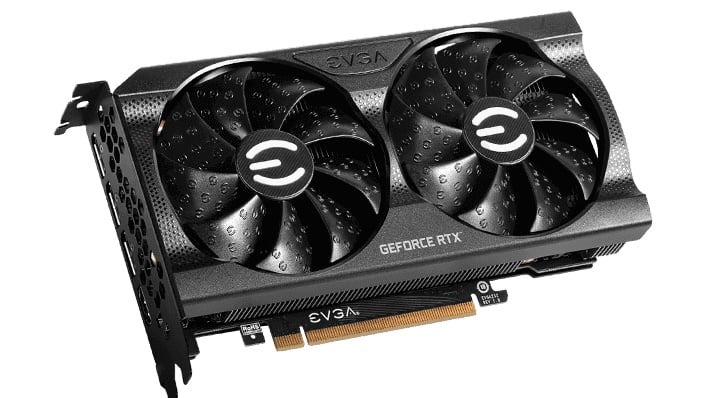 Stepping down a level, we have the XC variant of the GeForce RTX 3060 Ti from EVGA. Like its bigger brother, this card comes in a sleek all-black design with two fans and a dual-slot form factor. While it still has all the features of the GeForce RTX 3060 Ti, it is roughly as small as the ASUS Dual Mini at approximately 20cm. This gives the bonus of fitting in tight spaces such as a Dan Case A4 or perhaps something even smaller while still boosting up to 1710MHz. 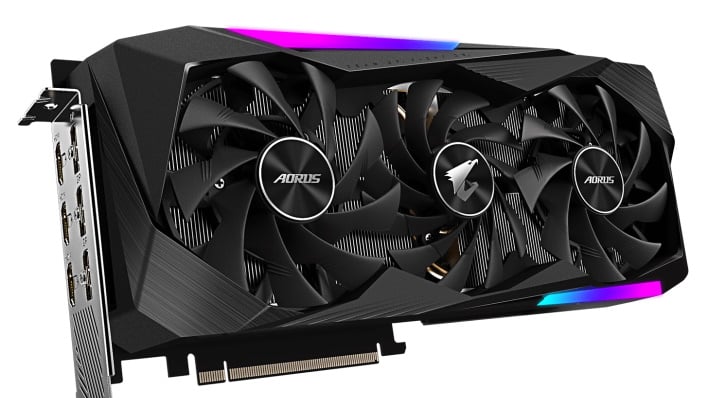 The AORUS GeForce RTX 3060 Ti Master 8G is, as the name implies, the master of the lineup from Gigabyte. Looking at the design, it is an all-black affair with some RGB highlights and a mini LCD screen to boot. You can upload your favorite GIF or get critical GPU health stats from it if you want. Aside from looks, it is another beefy GeForce RTX 3060 Ti card with three fans and a 2+ slot form factor.
Gigabyte claims that this card has "max-covered cooling" so the air can entirely cool the heatsink effectively, and you get clock speeds of around 1800MHz. 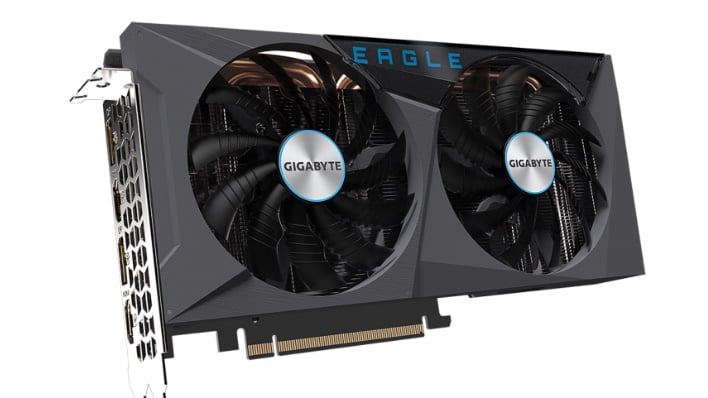 Surprise! Another baby brother GPU is up on deck, and it's Gigabyte's GeForce RTX 3060 Ti Eagle 8G. It has a squarer design but retains some of the RGB accent lights on the outward-facing edge. However, going with the trend is another card for smaller cases as it is a two-fan, two-slot affair that comes in at around 24cm in length. With that in mind, this will work just as well as any of the other GPUs for your small form factor gaming needs clocking in around 1665MHz. 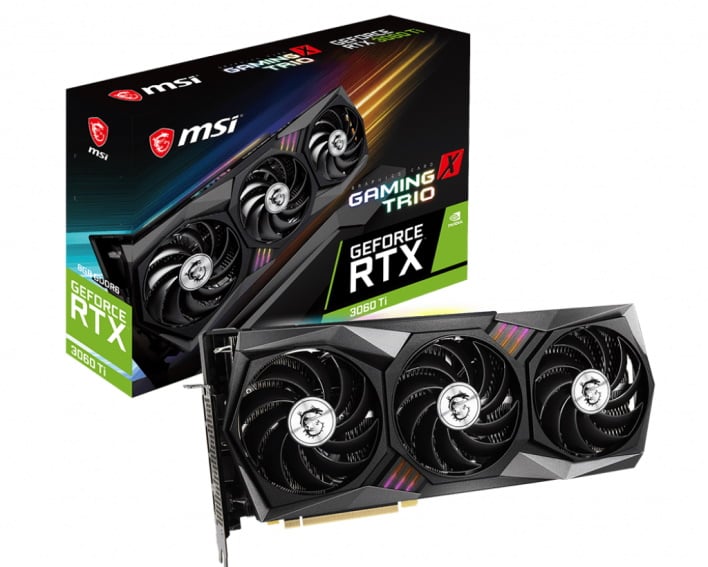 MSI's tagline for this card is "Play Hard. Stay Silent." While this sounds like it could be a line from 50 Shades of Grey, this large GPU is meant for gamers. It comes in a black and grey aesthetic with RGB accents around the body of the device. It also has three fans and is slightly bigger than two slots, so you will need some room for this one. You will really want some space for the fans to do their work as well, as this thing can clock in at a heady 1830MHz.

This GPU appears to be one of the "all business" SKUs out of MSI's GeForce RTX 3060 Ti lineup. It is a simple black and grey design that is not exactly matte nor glossy. The Ventus 2X also happens to be the smallest card as well with just a two-fan, two-slot arrangement. Aside from the design, however, there is not much else to say about this card as it will get the job done, boosting up to 1665MHz. 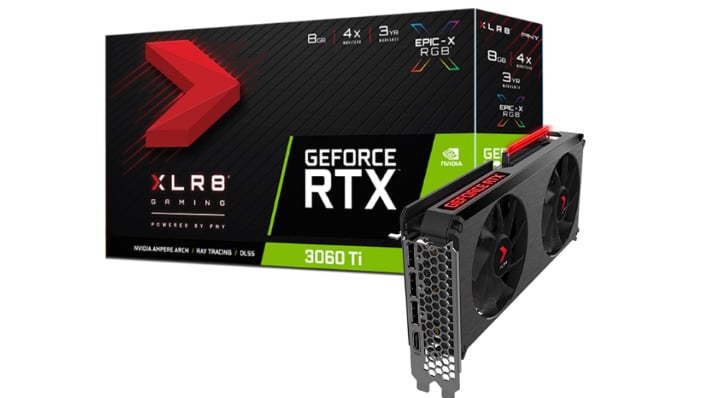 If PNY was going for a graphics card name that sounded like an edgy username from the early Xbox days, they nailed it. They also nailed the "gamer aesthetic" with a gunmetal and red accent color scheme with RGB LEDs around the card. Furthermore, if you are going for a small build, this card will be good as it is a two-fan, two-slot ordeal again. It can only boost up to 1665MHz, though, but the RGBs should make your PC faster, right? 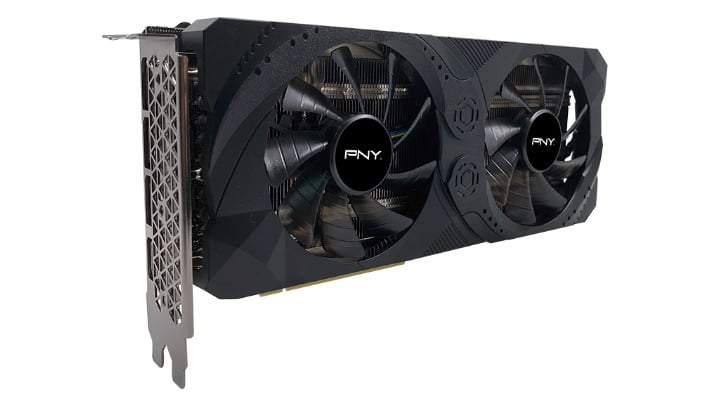 If you want a decent GPU that is not so…" gamery," PNY has got you covered with the UPRISING variant of the GeForce RTX 3060 Ti. While there are some designs and shapes on the card, it is a simple-looking matte grey shroud with two fans and a two-slot form factor. This unsuspecting card is still a beast, though, as are the other GeForce RTX 3060 Tis. It can boost up to 1665MHz like its bigger brother, too, so you aren't losing out if you choose this model over the other.

If I had not double-checked the names, I would have thought I opened the webpage for the same card twice. Both GPUs are nearly identical sans a few features, but the angular gunmetal grey design with some logos on the backplate will keep you guessing which is which. Both cards also have the same two-fan, two-slot design. The only notable difference appears to be that the card's OC variant has while LED lights on it. Even when you get down to the nitty-gritty, the OC variant only boosts 30MHz over the base model at 1665MHz, so there is not much difference here either.

Ultimately, there is a lot to digest with these cards, and we did not get into all the fine details. If you come across a card that you fancy, do some research and get ready for the official launch tomorrow.  Hopefully bots and overwhelming demand will not snatch up everything, but we will have to wait and see.