Like Microsoft and Sony, Nintendo gates its online-capable video games behind a subscription service. In the case of the Nintendo Switch, it's the simply-named Nintendo Switch Online. The subscription costs $19.99 USD per year, and besides enabling access to Nintendo's online services, it also allows you to play a library of 8-bit NES and 16-bit Super NES games.

This past Monday, Nintendo debuted the Switch Online Expansion Pack. For an additional $30 a year—bringing the annual cost to about $50 USD before taxes—you get access to Nintendo 64 and Sega Genesis games, as well as "other premium services," which at this moment are limited to the Happy Home Paradise expansion for Animal Crossing: New Horizons.


The Nintendo 64 games included in the collection are played on the Switch via emulation. It's the same emulator that powered Super Mario 64 in the Mario 3D All-Stars collection, but where that release was fairly brilliant, some of the titles on the current Switch Online offerings aren't so flawless. You've already read the headline, so yeah: The Legend of Zelda: Ocarina of Time has significant problems in its emulation.

The above video from YouTube channel ElAnalistaDeBits—fairly described as "Spanish Digital Foundry"—compares the Switch version with the Nintendo 64 original, and the results aren't great. While the emulated game runs in triple the resolution (from 320×240 to 960×720), many aspects of the emulation are either flawed, broken, or otherwise disappointing.


For example, shadows and other transparent elements in some areas flicker distractingly. The fog isn't rendered correctly, either; rather than being clear up close and foggy at a distance, the Switch Online version has a more modern smooth fog that scales out from the player, completely wrecking the ambiance of most scenes. Perhaps most damning is that reflections are broken, which makes the battle against Dark Link quite a bit harder! 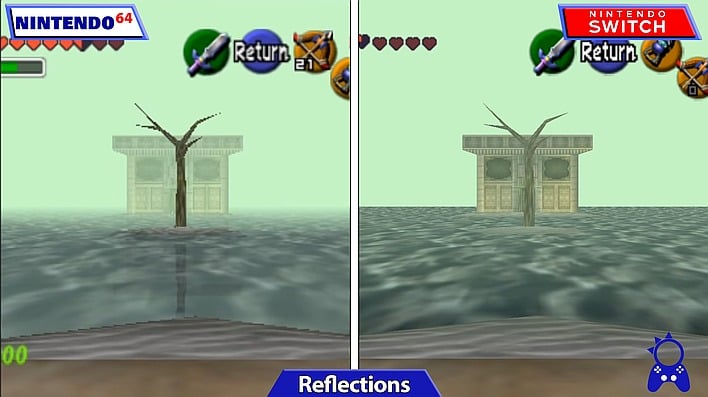 
There are other issues, too. Aside from the resolution bump, the game looks identical to how it looked in 1998; there was no effort made to upscale or replace textures, even the low-resolution 2D background used in some areas. It also still runs at its original 20 frames per second. That was tolerable in 1998, but it's hard to look at now, and it isn't a perfectly-locked 20 FPS, either. Despite the low framerate, the game also suffers from significant input lag. Modern Vintage Gamer also has a video up about Nintendo's N64 emulator, and he remarks that the input lag on the Switch Online version of the emulator is "noticeably worse" than that of the Mario 3D All-Stars version.

It's not as if the Switch is running into hardware performance issues; the Switch homebrew community has been (more accurately) emulating N64 games for the last four years with little difficulty. Indeed, it's all the more disappointing to see these problems in Nintendo's own emulator, when third-party low-level emulators based on reverse-engineering (like Mupen64Plus and ParaLLEl) are so much more accurate. Here's hoping Nintendo can issue a patch to fix up its N64 emulator woes.