Watch out, Boston Dynamics; you're not the only one out there with an impressive yet creepy-looking robot dog. The folks at Xiaomi today unveiled the CyberDog, and it looks similar to Boston Dynamics' Spot.

According to Xiaomi, it will offer 1,000 units of the "bio-inspired" CyberDog "Fans, engineers, and robotic enthusiasts to jointly explore the immense possibility of CyberDog." Xiaomi goes on to add that it will "set up the 'Xiaomi Open Source Community' to constantly share progress and results with developers around the world, and promises to establish a robotics laboratory to provide a platform for engineers to continue the pursuit of future innovations." 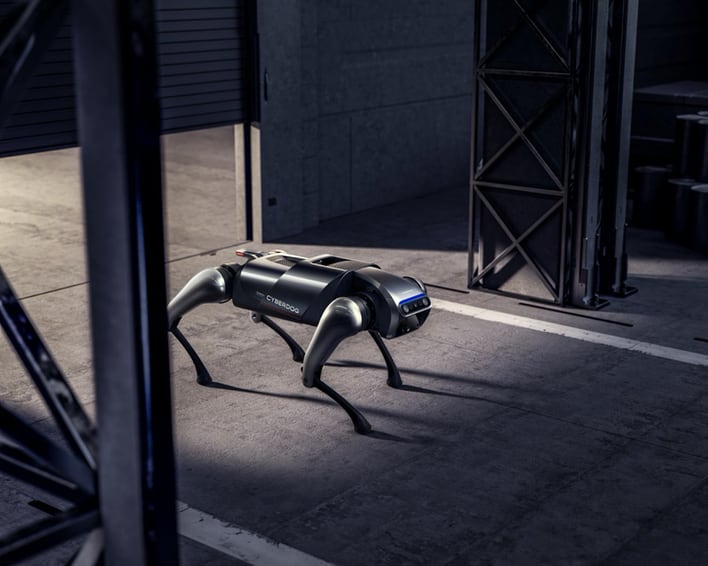 The brains behind the operation is NVIDIA's Jetson Xavier NX platform, which Xiaomi says makes the CyberDog a walking AI supercomputer. The 21 TOPS Jetson Xavier NX packs 384 CUDA cores, 48 Tensor cores, and a 6-core Carmel Arm CPU. The CyberDog's "brain" is constantly fed via touch and ultrasonic sensors along with GPS positioning data.

The CyberDog can see with binocular ultra-wide fisheye and AI interactive cameras, and there's even an onboard Intel RealSense D450 depth module and support for SLAM. "[The] CyberDog can analyze its surroundings in real-time, create navigational maps, plot its destination, and avoid obstacles," Xiaomi explains. "Coupled with human posture and face recognition tracking, CyberDog is capable of following its owner and darting around obstructions."

Xiaomi designed and built its own electric servo motors, which are used to power the CyberDog's four legs. They have a maximum torque/rotational speed rating of 32N·m/220 RPM, allowing the quadruped to travel at up to 3.2 meters per second (7 MPH). That itself is rather frightening, but even more impressive is that Xiaomi showed a video clip of the CyberDog performing a perfect backflip using its muscular legs. 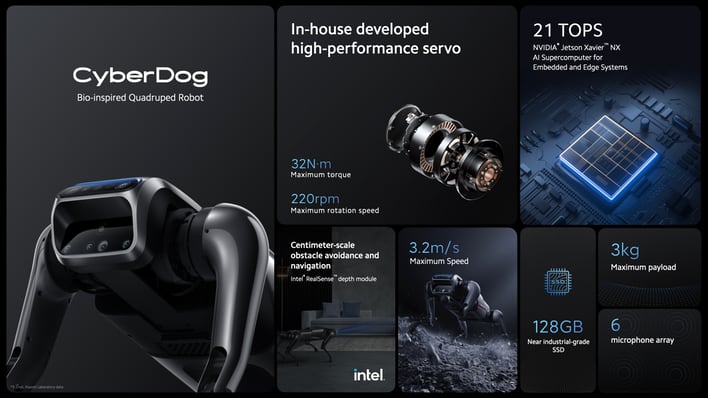 When it comes to expansion and interfacing with the CyberDog, Xiaomi includes three USB-C ports along with an HDMI port. In addition, the company says that developers will be free to add their own peripherals to the platform, including LiDAR and searchlights (among other accessories).

The Xiaomi CyberDog will be available soon, priced at 9,999 Yuan, or just over $1,500. Unfortunately, there is no word yet on U.S. availability and pricing.