We, as human beings, have an obsession with tiny things. It is not hard to see when you stumble across a YouTube channel dedicated to tiny cooking—Tiny Kitchen has hundreds of thousands of subscribers and millions of views across its videos. But we are computer geeks and nerds, not professional chefs of a small scale, and we're proud of it! So what have our compatriots in tiny computing cooked up for us lately? Why, an itty-bitty Nintendo Entertainment System, that's what!


"But wait!" You might say, "there is already the NES Classic on the market, and it's small." Well, sure, it is small, but is it small enough to fit on top of your original games industry-saving 1983 Nintendo Entertainment System alongside a tiny TV? We didn't think so. That's what YouTube Channel Print 'N Play has managed to put together. They call it the NES Micro.

YouTube Video of NES Micro
Using an Orange Pi Zero 2 with some slight modifications and a 3D printed case, they managed to cram in quite a capable device. The minimal modifications are simply a breakout of USB to a front-facing I/O and wiring to a simple On/Off push-switch. Even a 30mm fan was included to keep the device cool.
Because this gadget is simply a Pi-based device, the ability to load on whatever software you want makes it more capable than the NES Classic that Nintendo marketed. That allows the creator or anyone who wants to do the project themselves to load any emulators they want. With USB support, almost any controller your desired operating system supports via USB can work as well, but the hero of our story went a step further. He made a miniature NES Controller too! Though that was designed with a custom PCB.


Though not directly part of the capable little console, our creator decided to use a small 7-inch LCD screen to build a tiny television set. He even went with a wood-grain-looking finish, dials, and a 3D-printed antenna for that complete 1980s experience (just smaller). All in all, it's probably one of the simpler projects we have seen lately, like the Adafruit PINKY DOOM device, but could be fun for someone who loves a small challenge. 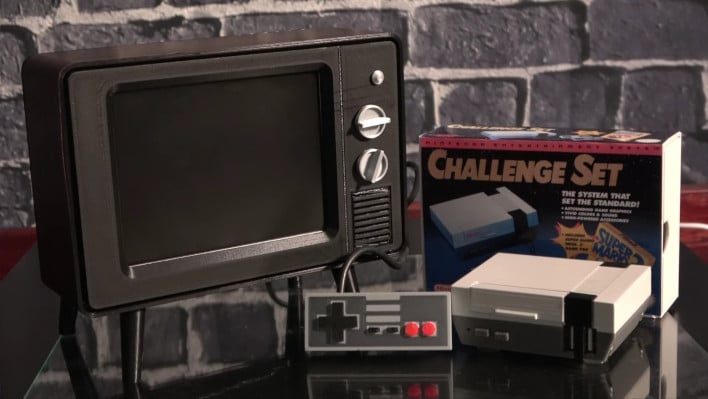