Some of us are suckers for nostalgia—it's the reason why I've been revisiting some old-school adventure games late, including The Secret of Monkey Island and Zak McKracken and the Alien Mindbenders. In a nod to the days of old, Microsoft is getting ready to update its Windows Terminal command line up with an optional throwback interface.
Microsoft is internally testing a new release candidate (Terminal v0.8), which its employees have access to at the moment. It will then go out to users who want it, on Tuesday, January 14, 2020. One of the highlights of the new build is "retro-style CRT effects," as shown in the image up top. This is an experimental feature, so who knows if it will stick around.
Those horizontal scan lines are a trippy throwback to when CRT monitors ruled the day, before flat screen LCD panels took over. As for the font, Microsoft says it is PxPlus IBM VGA, which you can find in The Ultimate Oldschool PC Font Pack. PCs have grown leaps and bounds since the days of CRT monitors and dated fonts, but if you're wanting to take a trip back in time, you soon can via Windows Terminal. 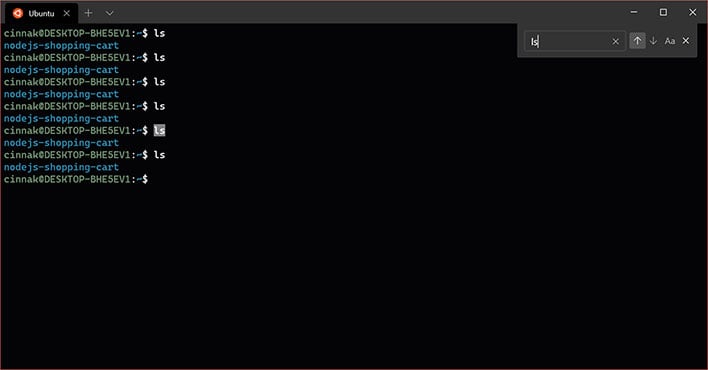 Search is headed to Windows Terminal

Beyond the resurrection of old school styling, Microsoft is also injecting some modern functionality into Windows Terminal. For one, users can search Terminal tabs to find specific code and commands (shown above). Users will also be able to resize tabs when Terminal v0.8 becomes available, as well as specify a profile to open using custom key bindings. And lastly, users will be able to apply a single setting to all profiles in their profiles.json file.
In case this is all new to you, Windows Terminal is an open source terminal application Microsoft has been working on for several months now.
"The Windows Terminal is a new, modern, fast, efficient, powerful, and productive terminal application for users of command-line tools an shells like Command Prompt, PowerShell, and WSL. Its main features include multiple tabs, Unicode and UTF-8 character support, a GPU accelerated text rendering engine, and custom themes, styles, and configurations," Microsoft explained last summer.
If things go to plan and no major hiccups are discovered during ongoing testing, Microsoft will launch Windows Terminal v1.0 in April.