There are no two ways about it, I'm heading into the weekend feeling old. Earlier today, I wrote about NVIDIA using AI to recreate Pac-Man without using a game engine, partly in celebration of the game landing in arcades (remember those?) 40 years ago. Today also happens to be the day that Windows 3.0 and Solitaire came out on PCs...30 years ago.
I was around for all of it. Windows 3.0 emerged on the scene with a graphical user interface sitting on top of MS-DOS. In that respect, it was sort of a skin, though that is oversimplifying things. Regardless, it enjoyed a mostly positive reception, having sold 10 million copies by the time Windows 3.1 came out a couple of years later. In a sense, JWindows 3.0 was Microsoft's first true mainstream OS.

Windows Solitaire hitched a ride on Windows 3.0, and took workplace gaming to a new level. According to Microsoft, it also helped people learn how to drag and drop items on PC monitor using a mouse, which was (and still is) a critical function of the Windows OS.
"Today, at the start of year 31, Microsoft Solitaire is played on computers, laptops, tablets, and phones in every corner of the globe, arguably by one of the most diverse gaming audiences in the world. Its Microsoft Solitaire’s unmatched familiarity and availability that’s contributed to its unending popularity, with more than half a billion players in the past decade alone, which no doubt added to the game being inducted into the Video Game Hall of Fame in 2019," Microsoft stated in a blog post. 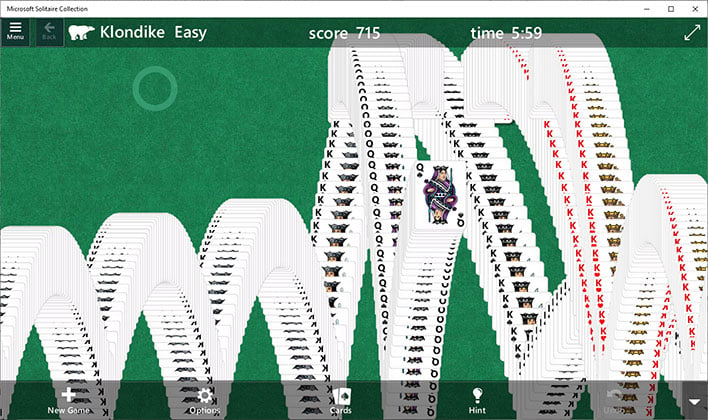 Wes Cherry, an intern at Microsoft back in 1989, developed the game for Windows. It's gone through several coats of polish since then, and has expanded beyond the PC—Microsoft ported its Solitaire Collection to Android and iOS in 2016.
According to Microsoft, Solitaire is one of the most played games on the planet. Microsoft Solitaire Collection hosts over 35 million players each month, and is available more than 200 countries and territories, in 65 different languages.