Two days ago, I was at my cousin's residence attempting to troubleshoot a Brother laser printer that would not work. The printer was duplicated several times in the Windows "Printers & Scanners" dialog, and troubleshooting had to go as far as removing all of the print devices, while rebooting several times, before finally reinstalling the latest driver, upon which point, lo and behold, it worked. Even Brother's own driver removal tool wouldn't work correctly.

It turns out that most likely none of that was Brother's fault. We were surprised at the time, because Brother traditionally makes good hardware and software. So, naturally, the culprit was in fact a Windows Update.

Indeed, Microsoft has added a new item to the list of known issues in Windows 10, version 21H1, and it has to do with USB-connected printers. The issue says "Printing to USB-connected printers might fail," and describes exactly the symptoms above: duplicated entries for the printers, and a failure to print from applications that describe the printer by name.


There's no patch for the problem yet, as Microsoft is still trying to work out exactly why it happens. On that note, if you're having this issue, Microsoft wants you to report it using their Feedback Hub app, although do be advised that you'll have to be using a Microsoft account to do so. 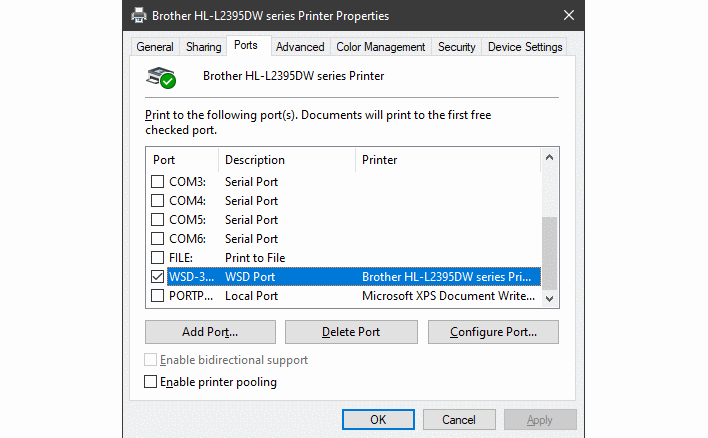 In the meantime, you can apparently fix the issue by looking at the Properties of the most recent "Copy" of your printer, checking the "Port" that it uses, and then changing the original copy to use that "Port" instead. Assuming that works, you can remove the other copies of your printer. If that DOESN'T work, as it didn't for us, you can do what we did: remove every copy of every print device, reboot, and then reinstall with the latest driver. That should fix it, at least temporarily.

Microsoft says it is still investigating the issue and will provide an update when more information is available. Note that this problem doesn't seem to affect network-connected printers, so you are probably able to work around and avoid the issue entirely by connecting your printer to your Ethernet or Wi-Fi network.