Facebook is reportedly pouring resources into research that would potentially allow it to analyze encrypted messages without actually decrypting the data, so that it can serve up targeted ads based on private communications. The technique is called homomorphic encryption. Should users of WhatsApp, the secure instant messaging service owned by Facebook, be concerned? WhatsApp boss Will Cathcart says no.
WhatsApp is popular because its end-to-end encryption scheme renders messages unreadable by anyone outside of the sender and recipient. So even if the data is intercepted, it would just be a bunch of garbled text to the hacker, who would need a decryption key to make sense of it all. Homomorphic encryption, on the other hand, is supposed to make it possible to analyze encrypted data without exposing it.
This is an area of interest to technology companies, including Microsoft. Here's what Microsoft has to say on the matter...

"While traditional encryption schemes can be used to privately outsource data storage to the cloud, the data cannot be used for computations without first decrypting it. This results in a huge loss of utility. For example, a secure cloud service may require a user to download their encrypted data, decrypt it locally, and perform necessary computations, instead of simply returning an encrypted result to the user.

Homomorphic encryption solves this problem, as it allows the cloud service to perform the computations while protecting the customer’s data with a state-of-the-art cryptographic security guarantee. The cloud only ever sees encrypted data, and only the customer can reveal the result of the computation."

Microsoft says it is actively working towards standardizing homomorphic encryption. Meanwhile, a paywalled report by The Information claims Facebook is hiring artificial intelligence researchers (including a key individual from Microsoft) to study this area, and suggests this would allow the social network to target ads at WhatsApp users based on encrypted messages they send and receive. 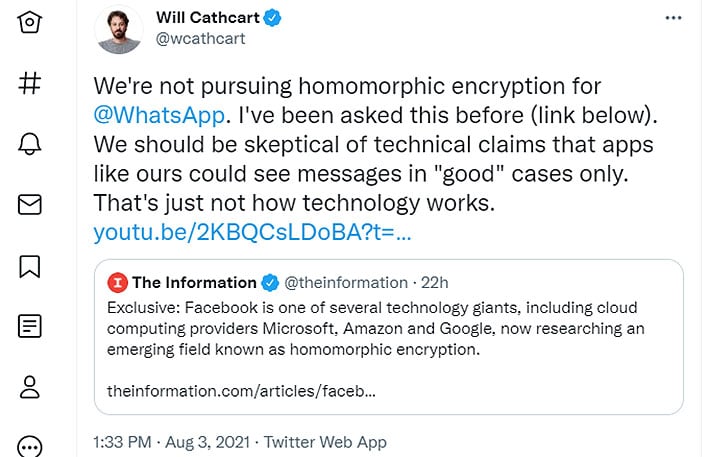 Will Cathcart, head of WhatsApp, says this is not happening, at least as it pertains to the instant messaging service.
"We're not pursuing homomorphic encryption for @WhatsApp. I've been asked this before. We should be skeptical of technical claims that apps like ours could see messages in 'good' cases only. That's just not how technology works," Cathcart wrote on Twitter.

In a video attached to the tweet, Cathcart downplayed homomorphic encryption as a sort of "magic solution" that could allow law enforcement to analyze encrypted data without sacrificing security and privacy. Simply put, he says there are "technical problems" with those kinds of solutions, and we should be wary of any technology that purports to examine certain 'good' data and not the bad.
"Either you can see messages or you can't," Cathcart says, adding that WhatsApp will continue adding more security to the platform as threats continue to grow.