Today is May 4th, better known as Star Wars Day. With this in mind, Disney dropped a bombshell on us this morning in the form of the first official look at the “real life” lightsaber that it’s been developing in [relative] secret. Although we doubt this realistic prop will sever limbs of cocky Jedi Knights that don’t have the high ground, it’s no doubt cool.

The lightsaber is seen in a short video clip posted on the Disney Parks YouTube page and shows the “energy beam” extending, backed by the classic sound effect. The lightsabers will be available to use at the Star Wars: Galactic Starcruiser hotel at the Walt Disney Resort. This interactive hotel will provide a two-night vacation package available to patrons starting in 2022 and will provide an “all-immersive” Star Wars experience.

“Watching that lightsaber activate right before your eyes will be just one of the countless ways that, from the moment you arrive to the moment you depart, you’ll be plunged into a Star Wars story where your decisions and actions – or even the casual conversations you may have – determine how your personal journey unfolds,” Disney writes. 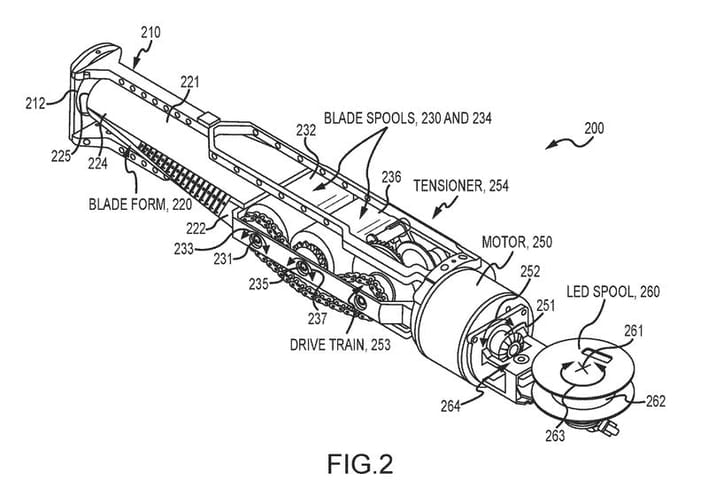 This new lightsaber was developed by the Walt Disney Imagineering Research and Development group. Although Disney didn’t detail how this lightsaber works, it did file a patent for a “Sword device with retractable, internally illuminated blade” back in 2018. Last month, Ben Ridout took things one step further by posting a video mockup of how the lightsaber could work.

It won't melt through metal blast doors, or cut off your hand, but it does feature an illuminated blade that will extend and retract at the push of a button.

This animation shows the concept behind the tech. pic.twitter.com/e7fwP06CxF

The basic premise shows two measuring tapes embedded within a cylinder that extend upward with the push of a button. In between the two pieces of measuring “tape” is a string of LED lights that provide the visual effect of the lightsaber. The two tape measurers give you a clear vision of how this could work, but we’re confident that Disney’s engineers have developed something a bit more robust that will stand up to abuse.

Next, widen the tapes and increase the curve, allowing them to partially wrap around each other and form a complete cylinder. Drive this system with a motor so both reels can be extended and retracted in synch at the push of a button. Now, you've got a lightsaber! pic.twitter.com/B3lLMmclDN

After all, a lightsaber duel using semi-rigid tape measurers would be a limp exercise in frustration. We’ll be eager to see how Disney can implement its extension/retraction mechanism while still making the actual “energy beam” rigid enough to stand up to frequent abuse.

With that said, Disney’s [current] official lightsabers are priced at $200, so we could see this new and improved version with a price tag well north of that already hefty sum.