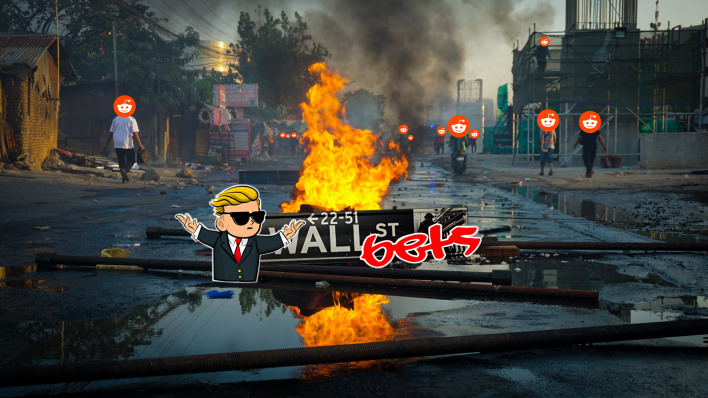 The events on the /r/WallStreetBets subreddit that occurred over the past few weeks were nothing short of chaos, degeneracy, and, in the purest definition of the word, awesome to watch unfold. What transpired culminated in the subreddit achieving mainstream media recognition with its community growing exponentially. Besides seeing stocks as dollar signs, some people saw the subreddit as an opportunity for more fame and fortune in the form of a movie deal. This ultimately led to a coup among WSB moderators, which led to Reddit stepping in to put these allegedly unruly moderators in their place.

It seems the trouble began to break out roughly two or three days ago after former /r/WallStreetBets moderator /u/zjz posted that “/r/wallstreetbets will die soon unless the admins save us.”

He explained that the subreddit's top moderators came back to collect a paycheck from movie, book, and other deals. Effectively, /r/WallStreetBets was “being sold out on multiple levels by the people at the top, and that everyone below them wants them gone and is heartbroken.” This post was then removed, presumably by one of the mods looking to make money and not draw attention.

Following this, reportedly, the mods looking to get deals and cash out of the situation began to remove other moderators who disagreed. Reddit user SpeaksInHexadecimals, with the user flair “WSB’s top detective,” called this event the “WSB Coup d'état.” Overnight, “moderators who wanted to profit from [the WSB] community, removed the moderators you know and love.” Then, malicious mods added new moderators with brand new accounts to fill in the void and make things seem “normal.” This all came after the founder of WallStreetBets sold his story to a movie production company, so likely others wanted to do the same.


An Update on the WSB Coup d'état from r/wallstreetbets

After the coup began, Reddit management had to step in and remove the bad actors to stabilize the situation. A letter to the moderators penned by Reddit admin sodypop and was acquired by Mashable. The letter explains that the Reddit admin team had to “remove several moderators at the top of the list that were creating instability in the community.” This seems to have also ensnared /u/zjz, as the letter reports they can no longer be a part of the /r/WallStreetBets moderation team. It is unknown if the latter half of the message will remain, though, as Reddit users have decried the move and have asked for zjz back as “the moderator of the people.”

Overall, this drama will make for a great movie ending someday, but not for the profit of moderators who started the coup. It has been interesting to follow the fiasco and to see how /r/WallStreetBets repairs itself will be equally interesting. Ultimately, though fame and perhaps fortune can get the best of people, it is nice to see some of the moderators remaining level headed, even when under the spotlight at /r/WallStreetBets.