Step aside China, there’s a new bitcoin sheriff in town! A study recently revealed that the United States currently leads the world in bitcoin mining. It has finally surpassed China, which was the undisputed leader for several years. However, cryptocurrency mining and exchanges are no longer welcome in China after its Central Bank declared that all cryptocurrency-related transactions would be illegal effective September 24, including "overseas virtual currency exchanges."

The study was conducted by the University of Cambridge Centre for Alternative Finance. Its Cambridge Bitcoin Electricity Consumption Index (CBECI) "provides an up-to-date estimate of the Bitcoin network’s daily electricity load." Findings of bitcoin’s global electricity consumption are from September 2019 to August 2021. They do not cover China’s most recent ban but the results are nevertheless still revealing.

Cryptocurrency mining and exchanges flourished in China for several years despite resistance from the government. China accounted for 75% of all bitcoin mining as of September 2019. China’s share dropped to 44% by May 2021 as more laws were put into place to discourage cryptocurrency mining. Their share of bitcoin mining is now at 0%, according to CBECI's tracking data. 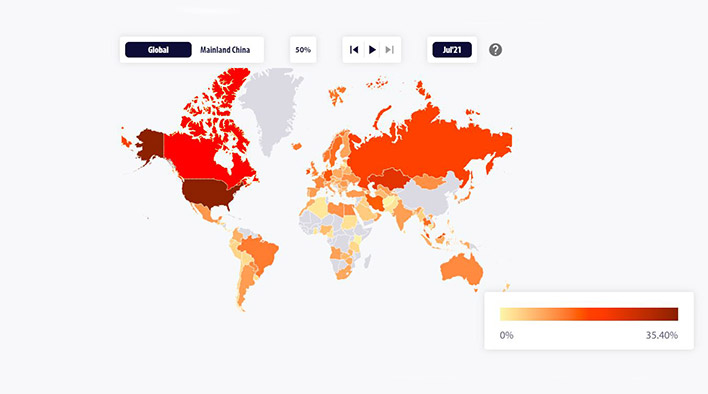 Meanwhile, the US accounted for 35.4% of all bitcoin mining in August 2021. It was followed by Kazakhstan with an 18% share, Russia with an 11% share, and Canada with a 9.6% share. Kazakhstan, Russia, and Canada all held less than 10% shares individually in April 2021, while the US previously only held a 17% share. It will be interesting to see if the US is able to maintain its current dominance as government officials stateside also attempt to regulate cryptocurrency.

China has been working on banning cryptocurrency for quite some time. Chinese banks were prohibited in 2013 from handling bitcoin, while the government banned initial coin offerings (ICOs) in 2017. Cryptocurrency mining was outlawed in several provinces earlier this year, and now that ban has extended nationwide. China’s Central Bank claims the laws are necessary as cryptocurrency has led to the "[disruption of] economic and financial order, breeding illegal and criminal activities such as gambling, illegal fund-raising, fraud, pyramid schemes and money laundering, and seriously endangering the safety of people’s property."
Bitcoin is incidentally surging once again. It is valued at $59,000 USD as of this writing, which is up around $5,000 from just a week ago, and around $11,000 from last month. It reached a high of about $65,000 in April. If this spike continues, it could pass that mark in the coming days or months.