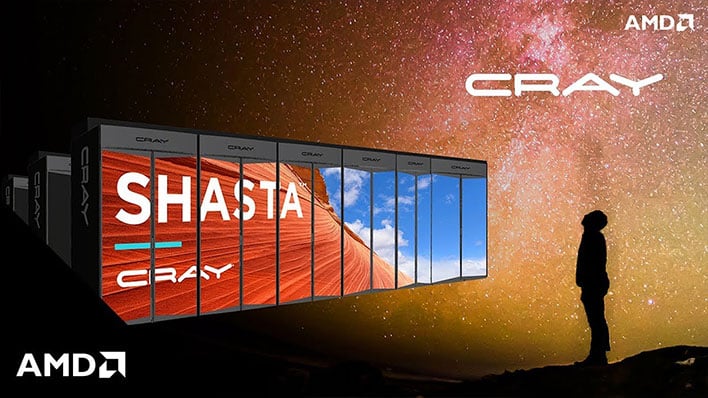 The United States Navy is enlisting a multi-million dollar Cray Shasta supercomputer powered by hundreds of thousands of AMD EPYC server processor cores and over 100 NVIDIA Volta GPUs. It ranks as the largest, most capable supercomputing system every deployed by the Department of Defense (DoD).
Cray Shasta houses 290,304 EPYC 7002-series processors core and 112 Volta V100 general purpose graphics processing units (GPGPUS). The hardware is all interconnected by way of a 200 gigabit per second (Gbps) Cray Slingshot network. To round things out, Cray Shasta is outfitted with 590 total terabytes (TB) of memory and 14 petabytes (PB) of usable storage, including 1PB of NVMe-based solid date drive storage.
"Our center is pleased to continue over twenty-five years of excellence in providing highly available supercomputers for the Department of Defense," said Christine Cuicchi, Director of the Navy DSRC. "While the new supercomputer itself will be quite the workhorse, it is complemented by a host of additional tools and services that the Navy DSRC offers in support of DoD users’ research activities."
"Most people wouldn’t expect Mississippi to be one of the premier locations for large-scale supercomputing,” Cuicchi added. "But we are, and this new system will solidify our presence in the HPC community.”

AMD's presence inside Shasta is a big deal, and also validation that it's Zen 2 CPU architecture is capable of powering through critical high-end workloads. It's not clear which exact EPYC "Rome" processors Shasta is using, but if they're AMD's 32-core CPUs, then that means there are over 9,000 EPYC processors inside. Likewise, if they are 64-core CPUs, then that's still over 4,500 CPUs.

The system will reside and operate at the Navy DSRC at Stennis Space Center in Mississippi. It has a peak theoretical computing capability of 12.8 petaflops, or 12.8 quadrillion floating point operations per second. Shasta ranks as the first high-performance computing (HPC) system in the HPCMP to offer more than 10 petaflops of computing power to DoD scientists, researchers, and engineers.
"The investment and increase in supercomputing power at the Navy DSRC at Stennis Space Center is absolutely critical to Naval Oceanography delivering future capability upgrades to global and regional ocean and atmospheric prediction systems, to include later this year the Navy’s first Earth Systems Prediction Capability," said Commander, Navy Meteorology and Oceanography Command (NMOC) Rear Adm. John Okon.
If Shasta were to go online today, it would be among the top 25 most powerful supercomputers in the world, as ranked by Top500.org. As it stands, Shasta is expected to be online in early 2021.