The U.S. Customs and Border Protection (CBP) has quite a bit of egg on its face this evening after a tweet that it posted went viral. The Washington, D.C. based agency’s mission — as stated on its Twitter profile — is to “[Secure] our nation's borders”  “facilitating lawful international travel & trade.”

As part of this mission, the CBP gleefully explained that it seized 2,000 counterfeit Apple AirPods that arrived in the United States from Hong Kong on August 31st. The counterfeit goods were discovered at an air cargo facility on a layover at JKF International Airport in New York, enroute to their final destination in Las Vegas, Nevada, and valued at $398,000 if they were actually genuine AirPods. Of course, they're not and they're not trying to be either... 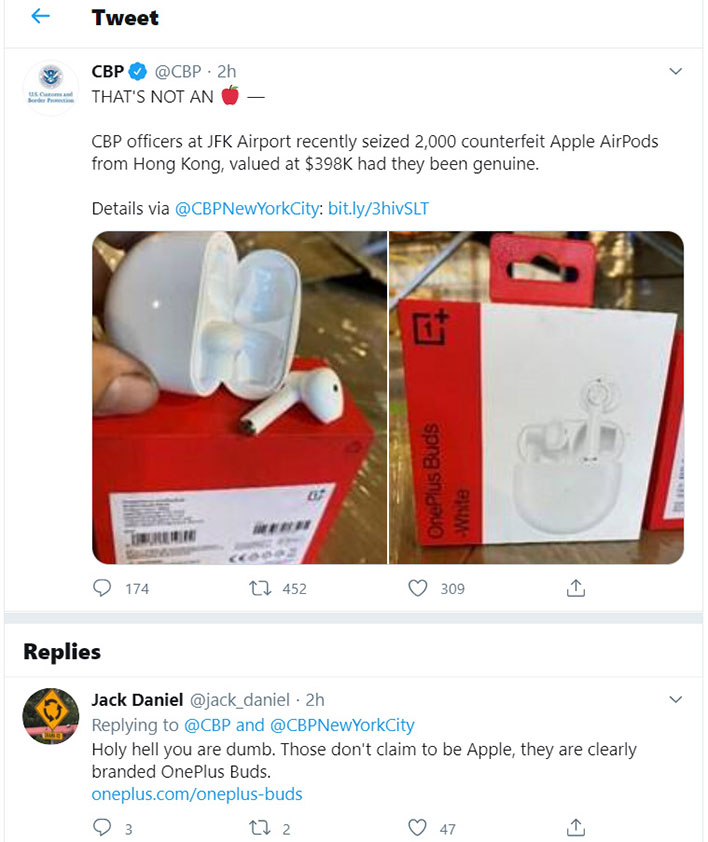 But here’s the problem; these aren’t AirPods knockoffs in the traditional sense, and they aren’t even labeled as such. In fact, they are actually OnePlus Buds — a legit product that is legally available for sale in the United States (they’re $79 at Amazon and a great deal actually). In fact, if you look at the images provided both in the CBP’s tweet and the accompanying press release, you can see that the boxes are clearly labeled as being OnePlus products with OnePlus Buds branding.

Perhaps the folks at the CBP aren’t well versed on OnePlus’ product portfolio, but we definitely are. You can check out the HotHardware review of the OnePlus Buds right here, where we praised their affordability, sound quality and battery life (among other things).

This gaffe by the CBP wouldn’t be so bad if they weren’t so boastful about being so completely wrong about their discovery. “CBP Officers are protecting the American public from various dangers on a daily basis,” said Troy Miller, Director of CBP’s New York Field Operations. “The interception of these counterfeit earbuds is a direct reflection of the vigilance and commitment to mission success by our CBP Officers daily.”

Bravo, good sir. All in a good day’s work… or not.