It appears that Virgin Galactic is about to get some competition in the supersonic passenger jet market. Back in October, Richard Branson's company unveiled its plans for a business jet that could carry between 9 and 19 passengers at speeds up to Mach 3. Today, United Airlines announced that it intends to purchase 15 faster-than-sound "Overture" passenger jets from a firm called Boom Supersonic.

According to United's announcement, its contract with Boom Supersonic calls for the prototype aircraft to roll out in 2025, with the first flight occurring one year later. If everything goes according to plan, the first passenger flights will take place in 2029. If United is happy with Boom Supersonic's progress, there's an option to purchase up to 50 aircraft. However, we all know that developing, building, and flying a brand new aircraft -- especially one rated for commercial flights -- is a long process that is often besieged with engineering problems and delays. So we can expect United's timeline to add at least a few years to those dates.

The Overture will reportedly reach a cruising speed of Mach 1.7, which is twice as fast as typical commercial airliners. In addition, the aircraft will be capable of carrying between 65 to 88 passengers, has a cruising altitude of 60,000 feet, and a range of 4,250 nautical miles (4,888 miles).

According to Boom Supersonic, the Overture could potentially make the flight from New York to London in 3 and a half hours instead of 6 and a half hours. Likewise, it could shave 6 hours off the 14 hour and 30-minute flight from Los Angeles to Sydney. The Overture will also run on 100 percent sustainable aviation fuel (SAF), giving it a net-zero carbon footprint. 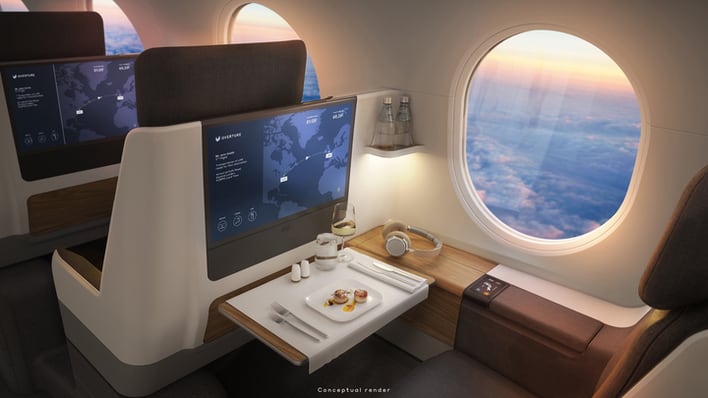 "Boom's vision for the future of commercial aviation, combined with the industry's most robust route network in the world, will give business and leisure travelers access to a stellar flight experience," said United CEO Scott Kirby. "Our mission has always been about connecting people, and now working with Boom, we'll be able to do that on an even greater scale." 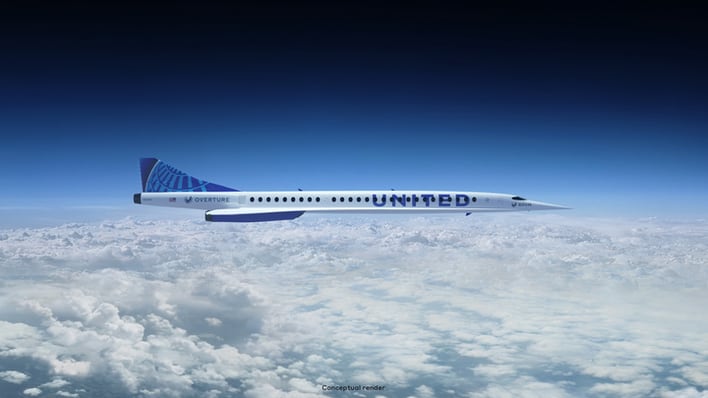 Boom Supersonic plans to fly its XB-1 demonstrator aircraft later this year. It's a scaled-down version of the production aircraft, coming in at 71 feet in length (versus 205 feet for the Overture). It will use three General Electric J85-15 engines capable of pushing the demonstrator to Mach 1.3.