Elon Musk is not taking bankruptcy off the table as the billionaire continues to try and make the social media platform profitable. The talk of possible bankruptcy also led to a few more top figures leaving the company.

Musk seems to be throwing a lot of stuff at the wall in order to see what sticks entering his third week of owning Twitter. He has introduced a new Twitter Blue subscription plan and issued mass layoffs since his takeover. Musk has been reported telling employees that Twitter may in fact lose billions of dollars next year and that bankruptcy is not out of the question. All of this has left some companies with reservations about advertising on the platform, while causing some executives to exit the company completely.

The world's richest man filled in his remaining employees about the company's financial situation during a phone call recently. After parts of the call were made public, Twitter's Head of Trust and Safety, Yoel Roth, updated his Twitter profile to show he had left the company. 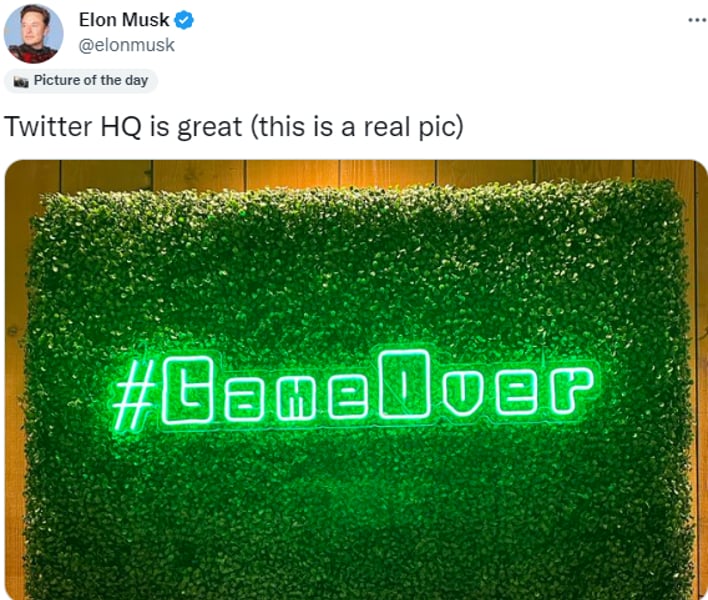 While it seems some employees and executives are very concerned over the future of the platform, Musk seemed to be unphased as he tweeted, "Usage of Twitter continues to rise. One thing is for sure, it isn't boring!" Just today, Musk tweeted a picture with #GameOver and saying, "Twitter HQ is great (this is a real pic)."

Another move by Musk that seemed to add to the unhappiness of some disgruntled employees was that remote work would no longer be allowed. For many that have become accustomed to the work-from-home environment, having to be back in the office for at least 40 hours a week may be a deal breaker.

Musk insists that the moves he has been making are to try and make Twitter profitable. Since taking over on October 27th, Musk says the company has been losing an estimated $4 million a day. Some industry experts say those high losses are due to advertisers leaving after Musk took over.