Twitter To Charge $8 For Coveted Blue Checkmark, Video Paywall May Be Coming Too

Elon Musk follows up his $44 billion buyout of Twitter by announcing his plans for charging more for Twitter Blue, a new video paywall feature, as well as teasing a possible Vine comeback. The billionaire is searching for ways to make the social media platform profitable.

Musk finalized the deal to buyout Twitter last week, putting an end to the drama-ridden purchase of the highly popular social media platform. Now, it looks like he is not wasting any time in trying to turn the company's financial situation around. Musk first teased a new Twitter Blue monthly plan costing $20, before lowering the cost to $8 a day later. But the plans for making Twitter a financial success do not stop there. It appears content creators may soon have the option of charging a fee for viewing their video content, and the once beloved Vine could be coming back to challenge the likes of TikTok and Instagram.

Twitter was all abuzz when Musk tweeted that he was raising the cost of Twitter Blue to $20. People quickly began announcing their dismay and disgust at such a high price, which would include being able to keep the blue checkmark beside their username. However, Musk seemed to be throwing out the high number in order to make the actual cost of $8 feel more reasonable. While the lower cost seemed to sit well with some, others were still not happy at the possibility of having to pay to get/keep a verified badge.

Along with an increase in price to Twitter Blue, Musk also announced an opportunity for content creators to make some money via a paid video feature. An internal email describing the feature stated, "When a creator composes a tweet with a video, the creator can enable the paywall once a video has been added to the tweet." The creator can then choose from a preset list of prices which range from $1 to $10 fans will need to pay in order to view the content.

While Twitter already allows adult content on the platform, it is currently blurred by default. The internal email did not disclose what type of paid content would be allowed, but one Twitter employee, who spoke on the condition of anonymity to The Washington Post, stated it would most likely include adult content to some degree. There has not been any revenue splits announced as of yet, but this could have Twitter also competing with other platforms, such as OnlyFans. 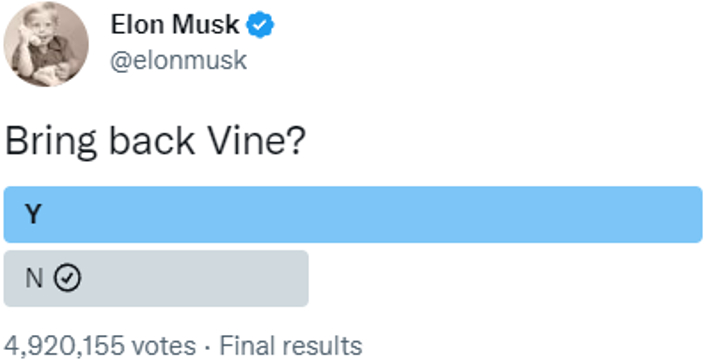 Along with possibly competing with OnlyFans, Musk also seems to want to bring back the once immensely-popular Vine app. At one time, Vine was the place to upload short videos with a chance of becoming famous. Some of the names that gained fame through the app are Logan Paul, Lele Pons, Nash Grier and KingBach. It has been said that Musk has told Twitter engineers to begin looking into bringing back Vine, so we will just have to wait and see on this one.