It could still be a bit before the industry-wide shortage of silicon eases up and dissipates completely. While it is difficult to precisely anticipate exactly when the situation will improve, there are signs that indicate it could be another long year for consumers and manufacturers alike. Such as the rising costs of wafers produced by TSMC.
TSMC is one of the biggest players in the semiconductor space. All of the major players source at least some of their silicon from TSMC, both fab and fabless outfits, including Intel, AMD, and NVIDIA, to name just a few of its clients. So any pricing and supply data related to TSMC is relevant to the industry as a whole.
Keeping that in mind, TSMC has apparently sent out notices to its customers to update them on adjusted pricing going forward, according to Counterpoint Research. The notices indicate TSMC is raising wafer prices across its main nodes beginning next year. And as such, we can surmise that supply will not be catching up to demand in the near future.

"The change in its pricing strategy from 2022 implies not only stronger market demand going forward, but also that the capacity tightness will persist in the next few quarters," the market research firm says. "Aside from the market mechanism, the new price strategy also protects foundries from both short-term and long-term uncertainties, such as double-booking effect (massive order cancellation), supply chain disruptions (increase in shipping cost) and geopolitical complexities, which may affect their production margins/profits." 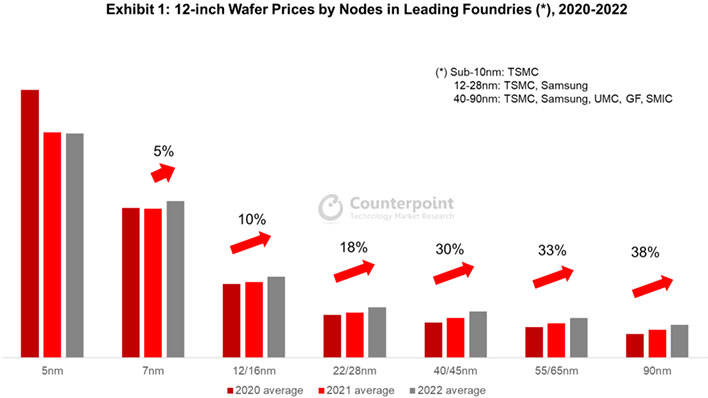 TSMC's biggest increases will affect more mature nodes, such as 22-nanometer and up. Compared to the first quarter of 2020, prices on 22nm/28nm technologies had already risen by as much as 40 percent, and those nodes are set to see another 10-20 percent jump next year.
Fortunately, more advanced nodes like 7nm and 5nm won't see price increases quite as dramatic. These are already more expensive to produce, and are being used for cutting edge products (like Zen 4 and RDNA 3 chips). The market research firm predicts an average 5 percent jump in price for 7nm/6nm nodes, while 5nm should stay the same.
There are a couple of takeaways from this data. The first one is that things like high-end graphics cards, game consoles, and other items that are in short supply (relative to demand) may continue to be hard to obtain for part or even most or all of next year. And secondly, increased costs on the manufacturing side could very well be passed on to consumers.
This will vary by product category. The market research firm points to smartphones specifically, noting thatt logic ICs account for 30-40 percent of the total bill of material (BoM) cost. However, the price increases are likely to mostly affect lower end handsets, with phone makers perhaps more willing to absorb part of the price increases for their premium phones that already command top dollar.
On the bright side, this should all be temporary, to an extent. TSMC and Intel are both investing billions of dollars into new and expande fab sites, and eventually those investments will bear fruit. Until then, as consumers, we'll just have to grin and bear what the market offers.