Taiwan Semiconductor Manufacturing Company (TSMC) is rumored to be hiking up prices of its 300mm (12-inch) wafers, which in turn could lead to higher prices for certain consumer electronics. If the report is accurate, TSMC will be charging 25 percent more for its 300mm wafers, compared to pricing from a year ago.
That amounts to a $400 increase, at least at the high end. And if it comes to pass, it will reportedly be a record high, though official pricing information from TSMC is not available (and varies by customer). Or in the semiconductor maker's own words, "TSMC is committed to providing customer value and does not comment on price issues."
Be that as it may, United News says that the continuous capacity strain has prompted to TSMC to adjust its pricing for both its 300mm and 200mm (8-inch) wafers. What exactly this will affect, and when, are not crystal clear though. That's due in part to the rumor status, but also because it is said some of TSMC's long-term customers had already negotiated contract prices for this year.
As for the companies that may have negotiated pricing more recently, the report states TSMC was not offering its usual discounts, said to be in the range of 3-5 percent. That being the case, it is believed the increased pricing is a short-term situation, and could mostly affect newer customers. 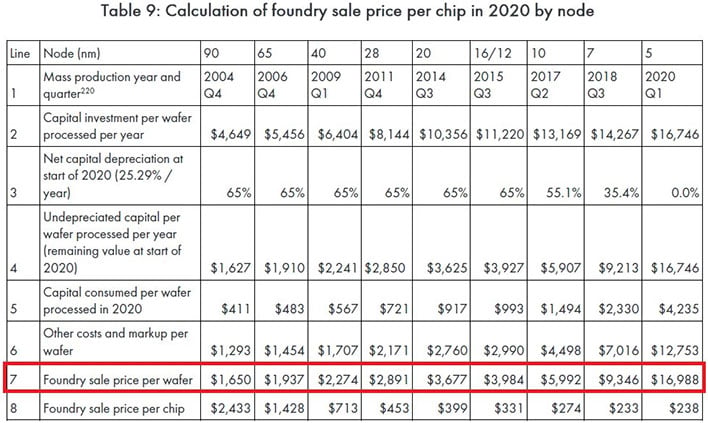 What does a typical wafer cost? Back in September, retired engineer @chiakokhua posted "rigorous estimates" indicating TSMC could be charging nearly $17,000 for a 300mm wafer based on a theoretical 5nm node (he was not specifying an actual chip or customer).
It is essentially a rough (and unofficial) estimate comprised from a variety of factors, such as packing costs, CapEx, and so forth. The general takeaway is that it is already expensive without the rumored price hike factored into the equation.
This plays into the chip shortage that is affecting several different products. To that end, Intel recently announced it is investing $20 billion into the construction of two new fabs at its campus in Ocotillo, Arizona. No timeline was provided, but looking longer-term, Intel's efforts should help prevent or ease these kinds of situations from playing out in the future (hopefully, anyway).