The US Transportation Security Administration (TSA) shared a couple of photos showing a double-edged knife that a passenger hid in their gaming laptop while attempting to pass through a security checkpoint at Richmond International Airport in Richmond, Virginia. The would-be airplane passenger initially plead ignorance but ended up confessing that he owned the knife.
During a first pass through the security checkpoint's X-ray machine, a TSA agent spotted what appeared to be a knife inside the traveler's carry-on luggage, but nothing turned up during an initial inspection of the bag's contents. The agent then separated each individual item inside the bag for another pass through the X-ray machine, and that's when it was revealed that the double-edged knife was "artfully concealed inside the guts" of the laptop. This was confirmed after the agents on duty grabbed a set of tools and took apart the laptop. 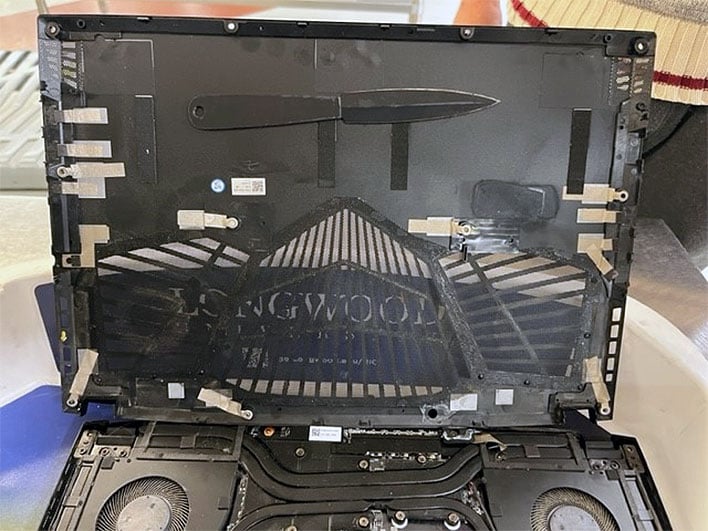 "This was a superb job on the part of our officers to first identify the threat and then work in partnership with the Capital Region Airport Commission Police to obtain tools that were necessary to disassemble the laptop to reveal the knife," said Robin 'Chuck' Burke, TSA’s Federal Security Director for the airport.
"Detecting artfully concealed weapons points to the training and skill of our officers who are focused on their mission to ensure that prohibited items that could cause harm are not carried onto flights. The traveler now faces a stiff federal financial civil penalty," Burke added.
There's no mention of why the passenger felt the need to conceal a knife inside his laptop, nor does it look like he's facing any jail time. As for the financial penalty, TSA's guidelines state that double-edged knifes are subject to a $390 to $2,250 fine. The same goes for meat cleavers, sabers, swords, fencing foils, and throwing stars.
That penalty range falls under the "ordinary artful concealment" category. If deemed an "extraordinary artful concealment," the fine can range from $5,320 to $10,700, according to TSA's guidance policy (PDF).. Examples the TSA gives for this category include a gun wrapped in aluminum foil and a book that has been hollowed out to uniquely fit a prohibited item.
Looking at the pictures shared by TSA, it appears the culprit fashioned the knife behind bottom panel of the laptop. Whether the laptop still functioned with the weapon inside is anyone's guess. And while not confirmed, the presence of a "G-Style" battery suggests this is likely a Gigabyte Aorus laptop with an NVMe SSD and a pair of memory modules. The obvious choice would have been a Razer Blade laptop, and the better choice is to not try anything so foolish.