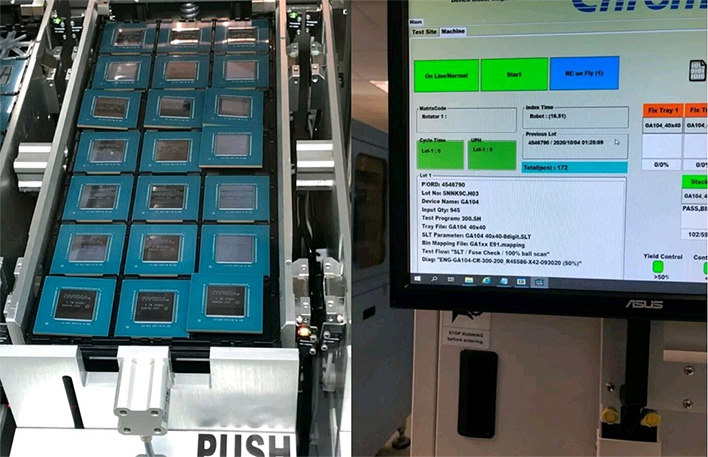 Let's not kid ourselves, NVIDIA could delay the GeForce RTX 3070 launch by a month instead of two weeks, as it has done, and eager gamers will still gobble up every last bit of inventory as soon as they become available. That is my prediction, anyway. Nevertheless, for those hoping to score one on launch day, a leaked photo of a tray of GPUs undergoing validation and bound for the GeForce RTX 3070 is a welcome sight.
In theory, anyway, but I will go ahead and dash that hope as well in just a moment. First let's talk about the situation we find ourselves in. NVIDIA launched its beastly GeForce RTX 3080 ($699) first, and between the bots, scalpers, and insatiable demand by gamers wanting a piece of the action, it flew off virtual store shelves as fast as NVIDIA and its retail partners could stock them.
NVIDIA's site actually buckled under the pressure, and the whole mess prompted the company to issue an apology, while promising to do a better job at screening and blocking bots in the future. It has been a few weeks, and getting a GeForce RTX 3080 at MSRP is trickier than getting a submarine with a screen door to stay afloat.
Then came the GeForce RTX 3090 ($1,499), basically this generation's Titan RTX. NVIDIA made less of these because it is more of a prosumer card than strictly a consumer part, and it sold out immediately as well.
Next up is the GeForce RTX 3070 ($499), the most affordable of the bunch while still offering performance as good as or even better than a GeForce RTX 2080 Ti, according to NVIDIA. Assuming that is even remotely true, it could potentially be in more demand than the other two SKUs. We'll see.
Circling back to the photo, it first appeared on a now-deleted Baidu forum post, and was picked up and shared on Twitter by @Avery78. Apparently this particular line is capable of validating 1,000 GPUs per day.
"Inspections completed and started a few days ago. Validation results are 'excellent', 'qualified', and 'unqualified'—the unqualified go back to be re-tested. Also, 'tens of thousands' of GA102 coming through," the post notes.
What you see in the picture is a tray of GA104-300 GPUs. These are what power the GeForce RTX 3070, with 5,888 CUDA cores, 184 Tensor cores, and 46 RT cores. It is an encouraging sight, though I have no idea when exactly the photo was taken. Likewise, there is no indication of how many GPUs are being produced or have been made up to this point. So my advice is, take this as an interesting photo of the inner workings of manufacturing, rather than a sign that there will be ample GeForce RTX 3070 stock to meet the initial flood of demand (I'll happily eat crow if I'm wrong).

Speaking of which, the GeForce RTX 3070 is slated to launch on October 29, one day after AMD announces its Radeon RX 6000 series. Savvy move, NVIDIA.