Don't bother penning an obituary for the mechanical hard disk drive (HDD), the storage medium is not going anywhere. Sure, we're all enamored by incredibly high-speed solid state drives (SSDs), and the push into PCI Express 5.0 territory will see another big jump in performance. But as far as capacity goes, HDDs still rule. To that end, Toshiba is prepping some major HDD storage capacity upgrades in the near future and for years to come.
In the more immediate future, Toshiba shared a roadmap showing that 26TB HDDs will arrive around this time next year. That's a more than 44 percent increase over its current most capacious models that check in at 18TB. Those models sport nine platters and leverage flux-control microwave-assisted magnetic recording (FC-MAMR) technology. These use spin torque oscillators to assist with recording data.

Even sooner, Toshiba plans to begin mass producing 20TB HDDs based on the same underlying technology, but with 10 platters underneath the hood. Then come the 26TB models with the same number of platters and, according to the roadmap, it will be the last HDD line to utilize FC-MAMR before transitioning to microwave assisted switching-microwave assisted magnetic recording (MAS-MAMR), a redundant-sounding technology that aims to improve recording density by locally exposing microwave to recording media. 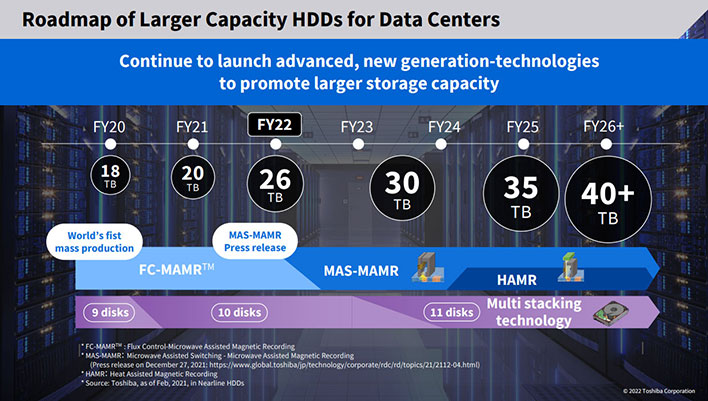 You probably won't be sticking a 26TB HDD into your PC this year, as Toshiba is focusing on the data center first. This is not unusual, especially in the realm of bulk storage. However, these always have a way of eventually trickling into the consumer space.

"Toshiba continues to work closely with the cloud companies to understand their exact capacity and performance requirements, and the ability to utilize our next-generation technologies will be key to meeting our customers’ needs," said Raghu Gururangan, Toshiba America Electronic Components, Inc. Vice President, Engineering & Product Marketing. "Many years of close collaboration work with our key component suppliers is leading to impactful technology breakthroughs to achieve higher capacities, which ultimately reduces TCO (total cost of ownership) of our Nearline HDDs."
Note that Toshiba's HDD roadmap above corresponds with its fiscal years. So that 26TB model is bound for data centers by the March 31, 2023, which is the end of Toshiba's fiscal year 2022. After that, Toshiba anticipates scaling to 30TB HDDs in 2024, followed by 35TB in 2025 and 40TB in 2027. Those three capacities will each feature 11 platters and advances in multi-stacking technology. And starting with 35TB, Toshiba will move to heat assisted magnetic recording (HAMR) to continue pushing capacities higher.