Titanfall 2 Is Free This Weekend On Steam, When To Get In On The Action

More than four years after it came out, Titanfall 2 maintains an 'Overwhelmingly Positive' rating on Steam, both in all-time reviews and in recent evaluations (it arrived on Steam a little more recently, though, in June 2020). Did you miss out on the game when it released in 2016? Well, now is your chance to jump in at no cost—it is free to play right now, and will stay that way throughout the weekend.
The free-to-play period has already begun and lasts until May 3rd at 10:00 am PT (1:00 pm ET). Not to look a gift horse in the mouth, but why focus on a game that came out around four and a half years ago? It's a fun game, for one—see our Titanfall 2 review. There has been a big spike in interest lately, with Titanfall 2 hitting what had been an all-time high in concurrent players in April at 16,958. 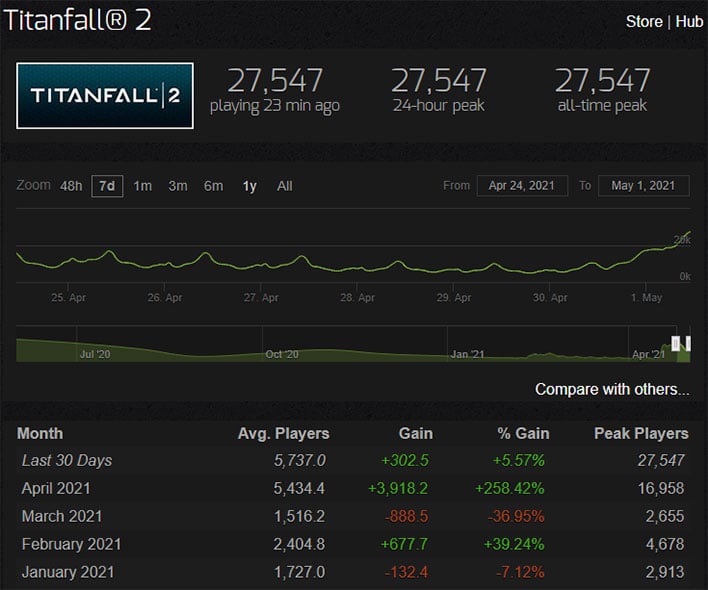 That number now sits at 27,547 as the free-to-play weekend is generating even more interest. Part of the reason why it spiked in the first place is because Steam slashed the price by 75 percent a couple of weeks ago. It's not clear if it will go on sale again after the free-to-play weekend, but you can nab the Titanfall Collection $24.98 (save 50 percent) right now. It includes Titanfall Deluxe Edition and Titanfall 2.
The sale may have played a part in Titanfall 2's rise in concurrent players, but there is another reason why people are flocking to the game. Titanfall 2's developer, Respawn Entertainment, is getting ready to inject a "ton of Titanfall content" into Apex Legends as part of its upcoming Season 9 update.
"Next season, Season 9, you're actually going to see a ton of Titanfall coming back into the game in one way or another. So, I've told some people before, if you're a Titanfall fan hang on for Season 9," said Apex Legends game director Chad Grenier.
Apex Legends Season 9 begins on May 4. In the meantime, head over to Steam to play Titanfall 2 for free this weekend.