Thunderbolt 5 Doubles Bandwidth To 80 Gbps According To Intel Leak

Social media can sometimes be tough to navigate, and if you accidentally post something that is supposed to be a secret, well, once the cat is out of the bag there is no putting the little fur ball back inside. And so in the latest episode of 'Whoops, Did I just Post That?', a high ranking Intel executive inadvertently teased the upcoming Thunderbolt 5 specification.
Gregory Bryant, executive vice president and general manager of Intel's client computing group, recently posted a series of photos to Twitter highlighting his trip to the company's research and development facilities in Israel. This was actually Bryant's first overseas jaunt in an official capacity in 2021.
Initially there were four photos, but he quickly deleted the initial tweet and re-posted it with three photos. However, the deleted photo is now making the rounds, because of what it reveals. Here it is... 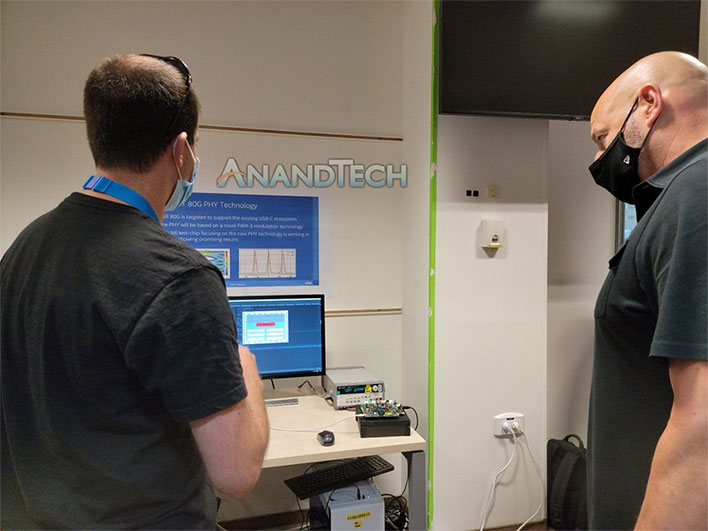 The folks at Anandtech managed to grab the photo before it disappeared from Twitter. In it, we can see a poster on the wall highlighting "80G PHY Technology," indicating that the Thunderbolt 5 will serve up 80Gbps of bandwidth. That is double the 40Gbps bandwidth that is associated with Thunderbolt 4.
There's also some other interesting information in the poster. It indicates "USB 80G is targeted to support the existing USB-C ecosystem," so no worries about Intel abandoning USB-C with the next Thunderbolt update. It also states, "The PHY will be based on novel PAM-3 modulation technology."

This is arguably the most interesting part, considering that a doubling of the bandwidth and maintaining USB-C compatibility are not exactly surprises. PAM-3 (Pulse Amplitude Modulation) encoding, meanwhile, uses three levels of signaling with three possible values: -1, 0, and +1.

PAM-3 signaling is used in some Ethernet speeds, including 100BASE-T4, 100BASE-T1, and 1000BASE-T1. Now it will find its way to Thunderbolt 5. In addition, the poster in the lab references an "N6 test-chip focusing on the new PHY technology" that is currently "working" and "showing promising results." This also indicates that Intel has tapped TSMC and its N6 node for Thunderbolt 5.

It's not clear when exactly Thunderbolt 5 will arrive, but it may not be long if tests keep going well. What this means for consumers is that the Thunderbolt specification will have the necessary bandwidth to drive high refresh rate displays, including 8K.