Hey there, you reading this—you are quite literally a hot human being. We mean that sincerely. The fact of the matter is, the human body produces heat (kind of necessary for our survival and all), and this has led to a team of researchers at the University of Colorado Boulder to pose the question, can body heat drive electronics? It can, and they proved it by developing a wearable device tasked with converting your inherent hotness into electricity.
The obvious reference at this point is to The Matrix, though fortunately in this instance, nobody is suggesting that robot overlords harvest our organic energy. Instead, researchers envision tiny stretchy devices being worn by people, like a ring or a bracelet, to make use of the heat we let off. Or put another way, these are thermoelectric generators (TEGs).
"Thermoelectric generators can directly convert low-grade heat to electricity and, thus, are very promising energy sources for wearable electronics and 'Internet of Things'," the researchers wrote in a paper published at Science Advances.
On the technical side, the TEG developed combines modular thermoelectric chips with a dynamic covalent polyimine material, and flowable liquid-metal electric wiring. They all comprise a design the researchers call a soft motherboard-rigid plugin module. The device is able to be stretched up to 120 percent, making it suitable to apply on human skin, and is also self-healing—if a part rips, just pinch it together and it will bond.

"Whenever you use a battery, you’re depleting that battery and will, eventually, need to replace it. The nice thing about our thermoelectric device is that you can wear it, and it provides you with constant power... Our design makes the whole system stretchable without introducing much strain to the thermoelectric material, which can be really brittle," said Jianglian Xiao, associate professor in the Paul M. Rady Department of Mechanical Engineering at CU Boulder. 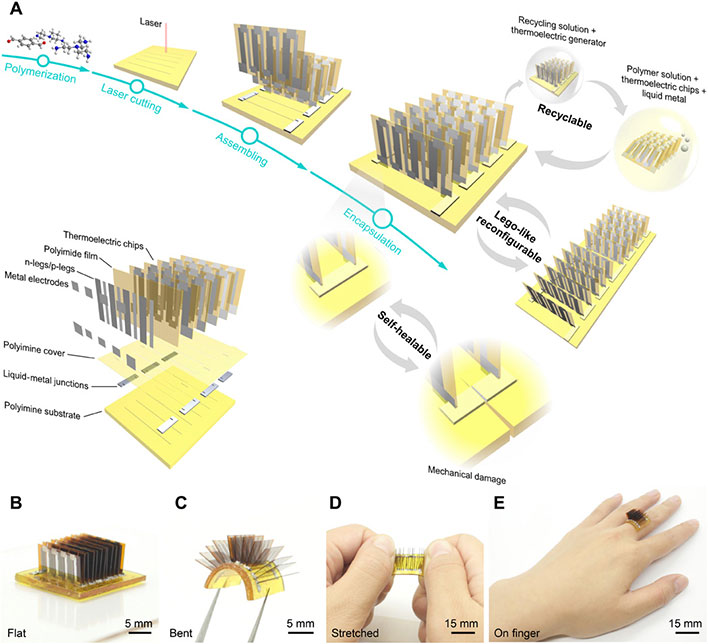 In addition to being flexible, self-healing, and recyclable, there is also a Lego-like characteristic to the TEG. For devices that require more power, a user could combine two of these gadgets, and we imagine even more, to generate more electricity.

Where this would have the biggest impact is when exercising. For example, going out for a run or jog, which in turn generates more body heat that the TEG can harvest.
The ultimate goal is to advance the technology to where a user could power a wearable device like a smartwatch or fitness band without a battery. According to the researchers, a brisk walk could generate around 5 volts of electricity in a wearable around the size of a sports band.
It is an interesting concept for sure, and one that could potentially materialize in commercial form within the next decade.