Researchers at Northwestern University in Chicago have developed a new wearable device, which uses a set of data algorithms tailored to catch early signs and symptoms that are associated with COVID-19. The team says that the wearable sensors can also monitor patients and the illness as it progresses. The sensor can be worn 24/7 and produces a continuous stream of data.

The sensor is combined with artificial intelligence to uncover subtle and potentially life-saving insights into COVID-19. The device can continually measure and interpret coughing and respiratory activity in ways that can't be done with traditional monitoring systems. Currently, the sensors are being used at the Shirley Ryan AbilityLab by COVID-19 patients, and the healthcare workers that are treating them. About 25 patients and caregivers began using wearable sensors about two weeks ago. 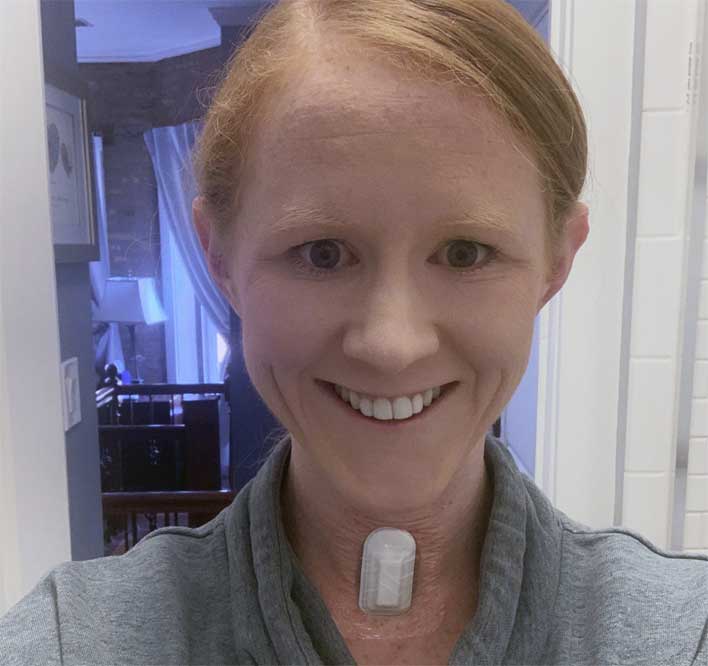 Test participants are being monitored in the clinic and at home, and have so far recorded more than 1,500 cumulative hours while generating over a terabyte of data. The sensor itself is about the size of a postage stamp, and is soft and flexible. It needs no wires to connect to a monitoring device and sits just below the super sternal notch, which is the at the base of the throat. In that location, the device can monitor cough intensity and patterns, chest wall movements, respiratory sounds, heart rate, and body temperature.

It's able to determine if the wearer has a fever or is having labored or irregular breathing. The data is wirelessly transmitted to the cloud using HIPAA-approved protocols where algorithms the team has developed produce a graphical summary that has been tailored for rapid, remote monitoring. The team believes that the advanced algorithms they have developed will be able to extract COVID-like signals and symptoms from the raw data before individuals may be able to perceive the symptoms themselves.

The sensor is able to monitor hospitalized patients and can be taken home to continue 24/7 supervision. The data streams in real-time giving insights into health and outcomes not currently captured or analyzed by traditional monitoring systems. The sensor is also unique for its ability to provide early warning signals to front-line workers who are at the most risk for catching the disease.

This wearable sensor was initially conceived to help monitor stroke patients and has been modified to work for detecting COVID-19 symptoms. The sensor is fully encased and has no wires or charge ports, allowing it to be worn while exercising or in the shower. It can also be sterilized and reused. The team is currently working towards strengthening their algorithms, and additional deployments of the wearable sensor are starting now.

In other COVID-19 news, Apple and Google clarified their contract tracing pact after a privacy uproar late last month.