You've probably never sat and wondered what your PC's cooling fans look like on the inside, and specifically underneath that spinning central section where the blades protrude from. However, if you're like me, then you also appreciate the underlying mechanics of even seemingly simple products. Like a cooling fan, which normally wouldn't warrant highlighting.
An inside look wasn't actually Thermaltake's goal, it was just an aside to its ToughFan announcement that struck me as interesting. Going for style points, Thermaltake this week launched a couple of white ToughFan high static pressure radiator PWM (pulse width modulation) fans in 120mm and 140mm sizes. It's a way to dress up your PC without RGB lighting, or any lighting, if you're into LEDs.
That's cool and all, but I'm more interested in a couple of renders Thermaltake shared. Here's one of them...

According to Thermaltake, these are "powerful and noiseless" fans that spin at up to 2,000 RPM, providing a consistent airflow of 58.35 CFM while maintaining a low 22.3 decibels (so not quite "noiseless," but certainly quite if the claim holds true). Thermaltake also touts a full steel motor hub for enhanced stability and durability.
And here's the other render that I found interesting... 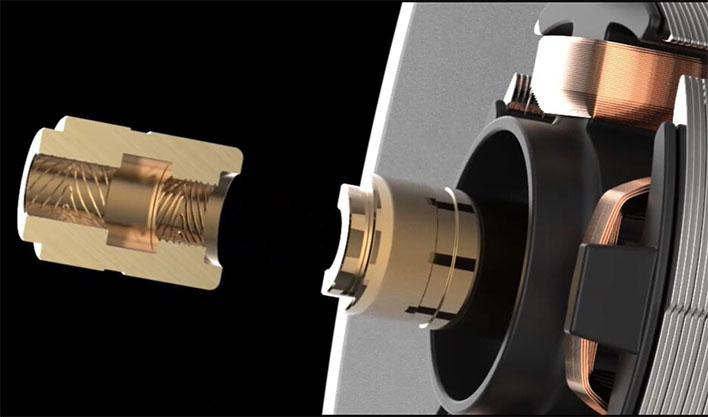 Thermaltake says this is a second-generation hydraulic bearing design. The company revised the shaft with etchings that are supposed to help preserve lubricant on both sides, which in turn reduces noise and extends the lifespan of the fan. It's kind of remarkable to think that fans last as long as they do, considering how many rotations they make.
Not groundbreaking stuff by any means, but the renders caught my eye as being neat, and figured I'd share them. Of course, Thermaltake's is also touting the "high tensile strength and low thermal expansion coefficient materials" in its ToughFan series, as well as "in-mold injection anti-vibration rubber pads" on the four corners to dampen vibrations. Ah, the joys of marketing.
For anyone interested, the fans are available now, priced at $24.99 for the 120mm model and $29.99 for the 140mm model.