When pictures surfaced last week showing one of Intel's stock coolers for its upcoming 65W Alder Lake desktop processors, the reaction to the overall design wasn't exactly enthusiastic. To be fair, we need to wait and see how it actually performs before passing judgement. In the meantime, some pictures of another Alder Lake heatsink have surfaced, and it should garner a more positive reaction.

At least from our vantage point, it looks pretty cool. It is a much taller design, which hopefully means there is a chunkier heatsink sitting underneath the fan. There's also an acrylic liner that circles the top portion to help temper the LED lighting, but perhaps the most welcome upgrade is the purported switch from plastic to aluminum fins that stand tall like winged columns. 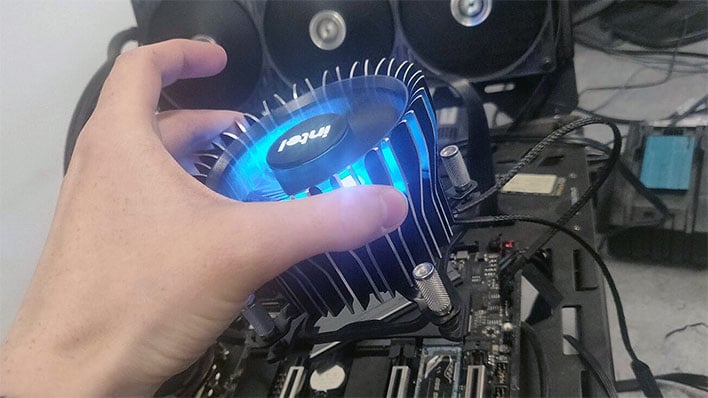 There's a better look at the fins (above). We can also make out metal push-pins for relatively easy installation into a socket LGA 1700 motherboard. The difference, however, is that this one will supposedly be bundled with Intel's non-K Core i9 processors within the 12th Gen family.
Based on past leaks, it's one of three "Laminar" thermal solutions for Alder Lake. The low profile design that broke cover last week was the RM1, and it is supposedly designed for Intel's 65W Core i7, Core i5, and Core i3 processors. There's also an RS1 that is intended for Intel's Pentium and Celeron processors based on Alder Lake.
The one you see above is the RH1 and, if the rumors are right, it will ship with the Core i9-12900 and Core i9-12900F. As for the Core i9-12900K and Core i9-12900KF, those are unlocked models that don't come with any stock cooling solution.
According to WCCFTech, which snagged this photos from @Catsarestillpr1, the RM1 does a better job at cooling than the previous generation, but doesn't quite match the capabilities of AMD's higher-end Wraith coolers. We shall see.
Images courtesy of @Catsarestillpr1