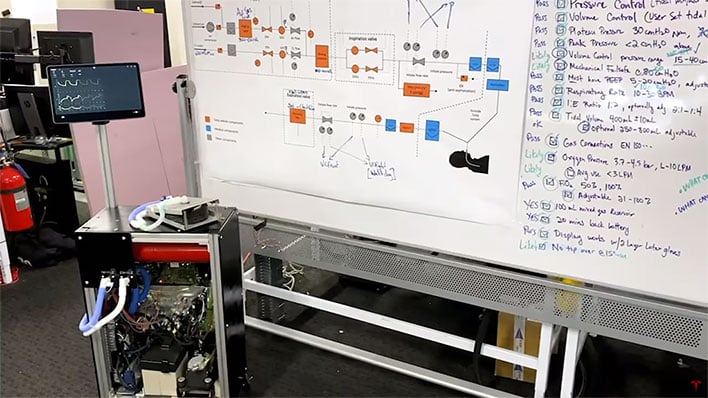 It is taking a cooperative effort on a global scale to stop the spread of COVID-19, of which there are now nearly 1.3 million confirmed cases and over 70,000 deaths. On the manufacturing side of the equation, technology companies like Apple and Tesla are stepping up to produce much needed equipment for medical workers.
As it pertains to Tesla, the automaker provided an engineering update on its custom ventilator made from various car parts, including components from its Model 3. Ventilators are complex contraptions. They are also supremely important in managing and treating some patients with COVID-19, but are in short supply at the moment.

Tesla is one of several automakers who are sourcing car parts for custom ventilators. In this case, Tesla's version uses an infotainment screen from the Model 3 to monitor and control airflow from a single-piece manifold. It allows for pressure regulated volume control, pressure control, or volume control. There is also a backup system in place, giving medical workers 20-40 minutes to move a patient, if need be.
A suspension air tank used in cars serves as an oxygen mixing chamber. Tesla is also using a host of sensors, an area it is well versed in the automotive space, with its focus on developing self-driving vehicles. If you have a few minutes to spare, we highly recommended checking out the video embedded above.

While a handful of automakers are building custom ventilators, other technology companies are focusing their efforts on masks, which are also in short supply in the medical industry. In a post to Twitter, Apple CEO Tim Cook announced that the Cupertino company has sourced over 20 million masks through its supply chain.

Apple is dedicated to supporting the worldwide response to COVID-19. We’ve now sourced over 20M masks through our supply chain. Our design, engineering, operations and packaging teams are also working with suppliers to design, produce and ship face shields for medical workers. pic.twitter.com/3xRqNgMThX

"Our design, engineering, operations, and packaging teams are also working with suppliers to design, produce, and ship face shields to medical workers," Cook stated.
Cook says this is part of a company-wide effort. Apple made its first shipment of face shields to Santa Clara this last week, with shields packed flat to fit 100 units per box. The masks can be assembled in two minutes and are fully adjustable, Cook says. Apple plans to ship 1 million masks by the end of this week, and then 1 million per week after that, with close coordination with medical officials across the US to get the masks where they are needed most. The company also hopes to expand shipments outside of the US.
It is nice to see technology companies diverting their efforts to medical supplies. As for what you can do at home, the same advice still applies—practice social distancing, and if you want to put your idle CPU and GPU cycles to work, you can run the Folding@home distributed computing project. And if you want to be part of HotHardware's Folding team, the team number is 32407.