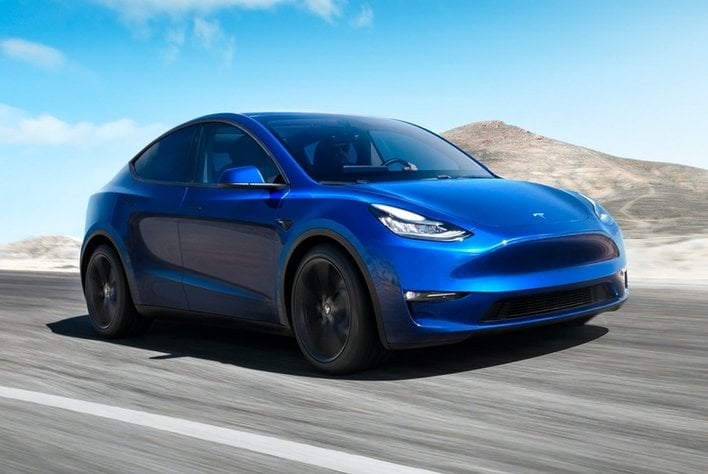 Tesla announced that deliveries of its highly anticipated Model Y crossover have begun. Initially, only the higher-end Model Y is available, with the standard range version expected to enter production in early 2021. The Model Y deliveries occurring at the moment are for the Long Range and Performance versions of the electric crossover.

Tesla says all of the Model Y EVs it's delivering currently have the premium interior and upgraded sound system. The Long Range version has a $52,990 base purchase price with the price of $46,690 after potential [future] fuel savings. The Model Y Performance has a $60,990 purchase price and costs $56,690 after potential savings. The Performance upgrade brings a higher top speed, different wheels, performance brakes, lowered suspension, and aluminum alloy pedals.

The standard version of both vehicles includes the five-seat interior, with the seven-seat interior coming in as a $3,000 option -- however, it won't be available until 2021. Buyers can opt for a black-and-white interior for an additional $1,000, with the standard interior being black. All Model Ys include Autopilot, but for what Tesla calls for self-driving capability, buyers will have to tack on an additional $7,000.

As part of the celebration of deliveries starting for the Model Y, Tesla has released a video that shows some of the construction process that goes into the vehicle. The video also shows off the clean interior and large glass roof of the crossover. If you add everything to the Model Y Performance Edition that is available for delivery this year, you'll push the price to nearly $70,000. This vehicle will go directly against the Ford Mustang Mach-E that is set to begin deliveries later this year. It's worth noting with Model Y deliveries commencing Tesla beat its promise when it unveiled the vehicle last year of delivering the Dual Motor and Performance trims in the fall of 2020.