This weekend, we brought you the news that the emerging Chia cryptocurrency is increasingly gaining in value, which has attracted an influx of new crypto miners. Chia is mined using unused space on your HDD or SSD, so it stands to reason that crypto miners are gobbling up these storage devices at a rapid clip to store cryptographic numbers (also called plots).

TeamGroup is looking to cater to this growing audience with its new T-Create Expert SSD, which was designed specifically for mining Chia. Since it doesn't rely on high-performance CPUs or GPUs, mining for Chia isn't nearly as "needy" concerning power requirements. "Storage capacity and power consumption are also relatively unrelated," TeamGroup explains. "Therefore, Chia Network is a new 'green' currency system." 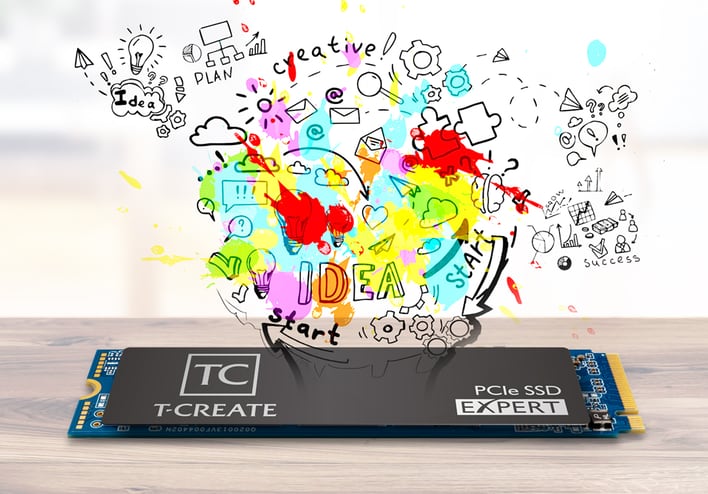 That's where the T-Create Expert comes into the picture. It is a PCIe 3.0 SSD with sequential read speeds of up to 3400 MB/sec and write speeds of up 3,000 MB/sec. Random reads/writes come in at up to 180K IOPS and 140K IOPS. More importantly, TeamGroup is quoting a MTBF of 3,000,000 hours and a terabytes written (TBW) value of 12,000 TB. With these figures, TeamGroup says that the Expert SSD has 3 to 10 times the endurance of its MP33 and QX SSDs. The company is so confident in the Expert SSD's performance that it comes backed with an incredibly generous 12-year limited warranty.

While it could be reasonably assumed that if more storage space is needed to mine for Chia that value-driven HDDs would be the best choice, speed is a significant factor with plots. Speed, of course, favors SSDs. "The location of temporary space is an important decision when plotting. You ideally want the temporary space to be located on a storage medium that is as fast as possible—NVMe based storage is often recommended," writes the folks behind the Chia cryptocurrency.

At this point, TeamGroup has yet to announce pricing or availability for its T-Create Expert SSDs, but it will be purchasable in 1TB or 2TB capacities.