We could definitely say that 2020 is the year of 5G, as most Android flagships released (rocking the Qualcomm Snapdragon 865) have come with a 5G modem onboard, and many mid-range smartphones also have 5G courtesy of Snapdragon 76x SoCs. With this in mind, many wireless carriers are working to expand the availability across the United States as the 5G hype train picks up steam.

T-Mobile has announced that it is boosting 5G speeds for its customers by doubling the availability of mid-band 2.5GHz 5G spectrum. T-Mobile has spent a lot of money to obtain mid-range spectrum (via federal auctions) and is putting it to good use. The wireless carrier claims that its 2.5GHz 5G is already providing customers with average download speeds that hover around 300Mbps. However, T-Mobile also indicates that its customers are seeing peak download speeds that can top 1Gbps.

That latter figure is typically reserved for Verizon's mmWave 5G network (which until recently was its only 5G strategy), which only works outside and within line-of-sight. In some instances, you could have mmWave coverage on one city block, then cross the street and lose all connectivity. T-Mobile is well aware of this, needing Verizon by saying that its 2.5GHz 5G "delivers both broad coverage and fast speeds at the same time -- and it can even go through walls." 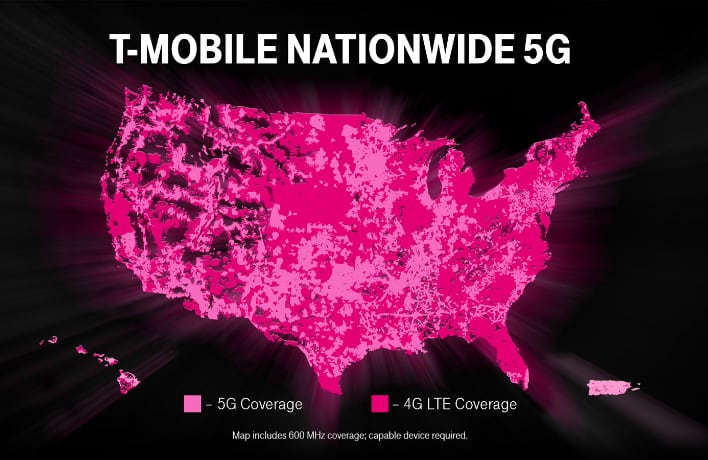 With this latest expansion, T-Mobile's 2.5GHz 5G is available in 410 city and towns within the United States, with plans to cover 100 million people by the end of 2020.

“We’re the only ones building a transformational 5G network built on dedicated — not shared — airwaves," said T-Mobile President of Technology, referencing the fact that wireless carriers often share sub-6GHz spectrum with existing 4G LTE infrastructure, which limits performance. "And that means only T-Mobile is capable of making the world’s best 5G network a reality.”

In the end, mid-band 5G range offers tangible performance benefits over existing 4G LTE connections and shared 4G LTE/5G towers, while delivering on most of the performance promises of mmWave without the range and wall penetration limitations. At presents, T-Mobile's entire 5G footprint covers 7,500 cities and towns in the United States and allegedly covers more square miles than AT&T and Verizon combined through a mixture of sub-6GHz, 2.5GHz and mmWave 5G technologies.