Score A Nintendo Switch, Mario Kart 8 Deluxe And 3-Month Online Membership For $299 (Save $70)

Inflation comes for everyone, friends. The prices of just about everything have gone up drastically in the last couple of years, and that even includes games consoles. While Sony is so far the only company to actually raise the price of its hardware, Microsoft and Nintendo have both said that the idea isn't off the table, so you'd probably better jump on any purchases you plan to make before they get even more expensive.

To that end, we've got a pretty damn decent deal on a Nintendo Switch as well as the most popular game for said system, Mario Kart 8 Deluxe. You get the Switch system with the classic "Neon"-colored Joy-Cons in red and blue, the standard dock, and a code for the game download.

You'll probably want to snag a MicroSD card too, though; otherwise, the Mario Kart 8 download will take up most of your system's storage. You can get a 512GB Samsung EVO Select UHS-1 card with U3, A2, and V30 classifications—perfect for the Switch or Steam Deck—for just $45 right now at Amazon.

The bundle also includes three months of Nintendo Switch Online. This service is required for online play, just like with the similar Xbox and PlayStation services, but it also gives you access to cloud backups for your saved games, access to the Nintendo Switch Online phone app, and a small library of 8-bit NES and 16-bit SNES games for free. With the "Expansion Pack" you also get access to some Nintendo 64 and Sega Genesis games. 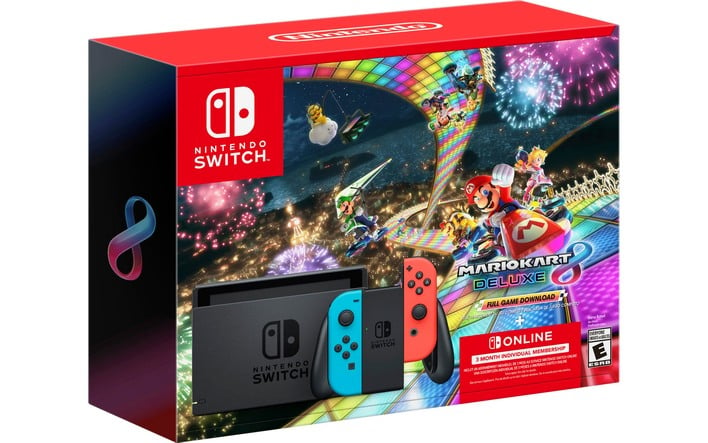 
All this is available at Best Buy right now for $299, which is the same price as the Switch by itself, normally. If you'd like to help out the site, that same bundle is available over at Amazon too, although at the time of this writing it's not available at that price. Check back later if you're pondering a purchase, because it could come back into stock.