It's been a little over a year since the first visuals for The Super Mario Bros. Movie were revealed. After at least one delay, there is finally a trailer and additional confirmation on the release date. Not only that, we finally get to hear Chris Pratt's interpretation of the Brooklyn-native Italian plumber. Unfortunately, fans are not entirely happy with what they've heard.

The trailer released during the Super Mario Bros. Direct on October 7, 2022. It opens with an ominous first look at a representation of one of Bowser's Flying Fortress' before he attacks a penguin-populated kingdom, likely an homage to the Snow Kingdom from Super Mario Odyssey. Penguins' first appearance in the Mario universe was actually before the first Super Mario Bros. game, in Pinball (1984). Of course, Mario himself predates that when rescuing Paulina from Donkey Kong in the 1981 arcade game, Donkey Kong.


Filled with an impressively star studded cast, this cinematic rendition of Mario seems like it holds more promise than the 1993 Super Mario Bros. film. That ill-fated version featured Bob Hoskins and John Leguizamo, which even Mario creator Shigeru Miyamoto wasn't too fond of. The company at the helm of the Super Mario Bros.: The Movie endeavor is Illumination Entertainment, the creators of the massively successful Minions series of films.

A number of fans were really hoping to hear long-term Mario voice actor Charles Martinet. There are, of course, nostalgia-ridden fans who would have loved to hear Lou Albano, the Mario character and voice actor for the 1989 TV series The Super Mario Bros. Super Show! but unfortunately Lou passed away in 2009. Nevertheless, Chris Pratt has taken up the mantle, and fans are not too keen on the voice so far.

Jack Black's King Koopa (Bowser) and Keegan-Michael Key's Toad definitely sound like they put some work into making them more interesting than their own voice. We honestly think those two voices sounded fantastic in the trailer. Some Nintendo fans across social media feel like Chris' interpretation is too similar to his own voice. One fan even posted up a clip of the French dub trailer saying they're going to watch that because it just sounds much closer to Martinet's version. 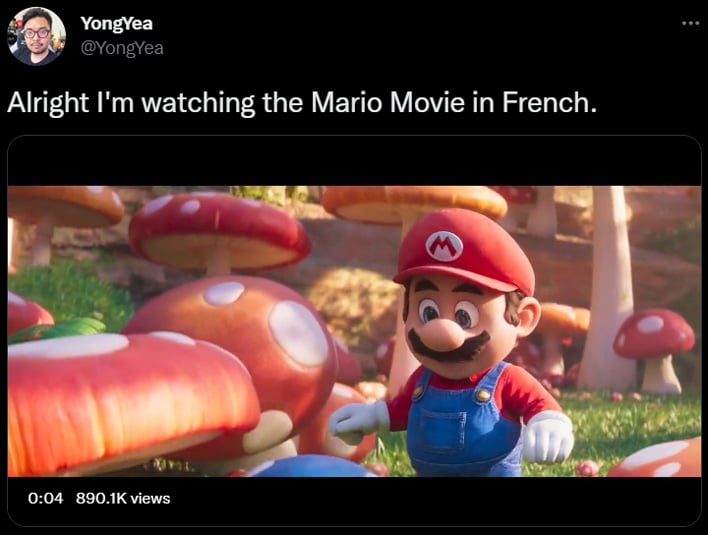 Still, it does seem like Pratt tries to do a somewhat Brooklyn like voice when you hear him shout "Mushroom Kingdom, here we come!" It's by no means exactly accurate, but he was at least trying to get a little "New York-ish"—we think. It would make sense considering the Plumber's origin story does, in current context, place his non-fantastical home as Brooklyn, New York. Most of the time, though, we're expecting to just hear Pratt's voice, as the initial voice was unmistakably Chris Pratt's own.

There are, of course, plenty of other well known voice actors we have yet to hear, we get to see Luigi, but we don't hear Charlie Day's version. We know Seth Rogen is Donkey Kong, Fred Armisen is Cranky Kong, and Anya Taylor-Joy, who played Beth Harmon in Queen's Gambit, is the voice of Princess Peach. Even if fans are a little disappointed at Chris Pratt's voice, many are absolutely stunned by the beautiful visuals being placed in this film. Super Mario Bros. The Movie is intended to be released on April 7, 2023 in theaters and we're probably going to see it.