“It’s-a me, Mario!” Well, not quite yet. Nintendo recently announced that the upcoming Super Mario Bros. movie has been delayed until Spring 2023.

Shigeru Miyamoto tweeted via Nintendo’s Twitter account that the film will not be released until April 7th, 2023 in North America and April 28th, 2023 in Japan. The decision was made after Miyamoto consulted with his partner at Illumination Entertainment. Miyamoto remarked, “My deepest apologies but I promise it will be well worth the wait.”

It is currently unclear why the movie has been delayed, but there are several theories. First, the movie will now be released in North America during Passover and Easter weekend. That will be a fantastic time to appeal to families. Second, James Cameron’s Avatar 2 is scheduled to release on December 16th. This would directly pit the Super Mario Bros. movie against one of the most anticipated films of the year. It so far seems that there will be less competition in April 2023. 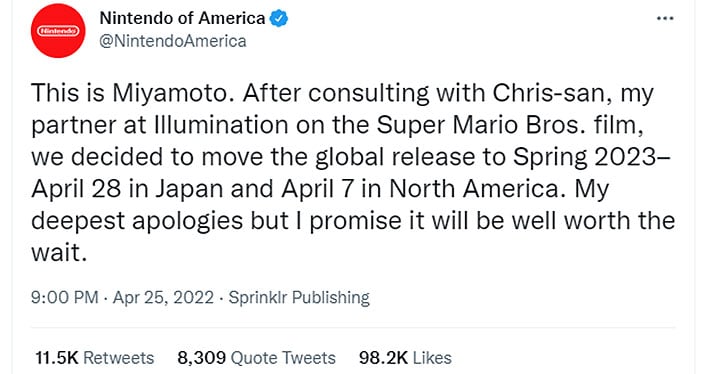 There is so far little information about the plot of the upcoming film and an official name has not yet been announced. However, we do know some details about who is working on the film. The movie is being produced by Nintendo and Illumination Entertainment, the producers of Despicable Me, Minions, and The Secret Life of Pet. It has been written by Matthew Fogel, one the writers of Minions: The Rise of Gru, and co-directed by Michael Jelenic and Aaron Horvath. Chris Pratt will voice Mario, Anya Taylor-Joy will voice Princess Peach, and Jack Black will voice Bowser. The movie will feature Charlie Day as Luigi, Keegan-Michael Key as Toad, Seth Rogan as Donkey Kong, Kevin Michael Richardson as Kamek, Fred Armisen as Cranky Kong, and Sebastian Maniscalco as Spike as well. So there are some notable names attached to the movie.