We have come a long way from punching a hole into the side panel of our cases when it comes to case mods. We have seen added windows, improved airflow, worse airflow, and even unique objects used as cases. Some mods may be as simple as sleeper builds where you have a powerful PC inside an old case. Others are more complex, like using kitchen appliances such as a refrigerator, or, in this case, a microwave.

Some mods are born out of ingenuity, others born out of necessity. Still, we love to see the combination of the two meeting and the microwave computer case build is just that.

He built this fully operational for just $900 pic.twitter.com/UxRRtqgtcl

Apparently, during the pandemic a man in Brazil lost his job and decided instead of spending money on a new PC case, he would just build inside his microwave. Or at least, that is what the Tweet thread by Jake Lucky explains. Upon losing his job, this man's girlfriend of nine years assisted him financially in building the PC, but he decided instead of spending money on a case, he'd use his electrical knowhow to make the microwave his case. 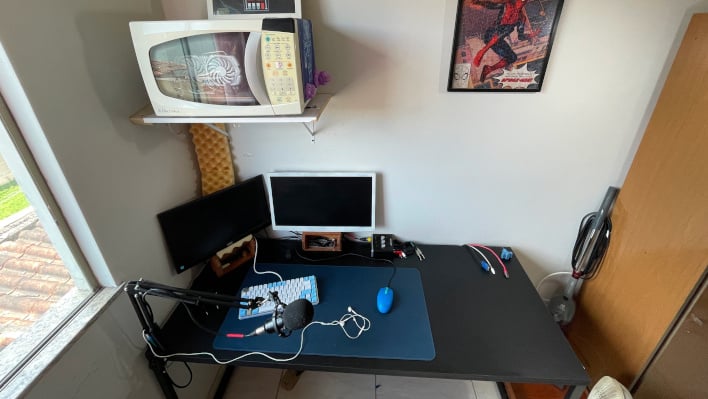 Obviously putting metal in a working microwave is bad, so we don't recommend shoving your PC into a microwave and turning it on. However, there are certain facts about how a microwave is built that actually make building inside of one seem almost sensible. First of all, they are usually already grounded quite well, are shielded which can prevent additional electrical interference, and are insulated—often with some form of ventilation already built-in. They are little computers, after all. So our intrepid inventor decided that "starting the microwave" would also start his PC. Additionally the door makes it relatively easy to access the hardware if maintenance is needed.

While it's difficult to say exactly what parts are inside the device from photos and video Twitter, Jake Lucky claims the total cost of the build was around $900. Now we're wondering what this guy would build if he won the lottery.