As any cat owner can attest, our feline companions love to climb things—bedspreads, curtains, the backs of couches, fleshy human legs, and the list goes on. We can now add Steam's concurrent players chart to the list, too. In less than 24 hours, Stray has climbed to over 60,000 concurrent players, peaking at 62,963 shortly after it released. This despite the developer acknowledging a stuttering issue on PC.

For anyone who managed to dodge the pre-release hype and anticipation, Stray is a third-person (third-cat?) adventure game developed by BlueTwelve Studio using Unreal Engine 4 and published by Annapurna Interactive. You play as a stray cat that's been separated from its colony and navigates a cyberpunk landscape filled with robots, machines, and puzzles to solve.
It's available on PlayStation 5, PlayStation 4, and PC. It's also part of Sony's PlayStation Plus Extra and Premium tiers. I signed up for the Extra tier yesterday specifically to give Stray a whirl and spent around 30 minutes playing it so far. My initial impression is that it's an adorable and oftentimes comical portrayal of the life of a cat. The first time I purposely knocked an object off a balcony, I was hit with an 'a-ha!' moment and immediately understood why cats practice this annoying habit in real life.
Speaking of real life, players have been uploading videos to Twitter showing their actual pets being enamored with the game. Here are a couple...

One of my own cats, a recently rescued stray himself (feral-turned-domesticated), took an interest in the game while I was playing it as well. You can also find videos and pictures of dogs watching their owners play Stray, so it appears to be resonating with the animal kingdom at large.

As far as humans go, Stray is Annapurna Interactive's biggest launch title to date, having hit 50,555 concurrent users less than an hour after the game release on Steam. 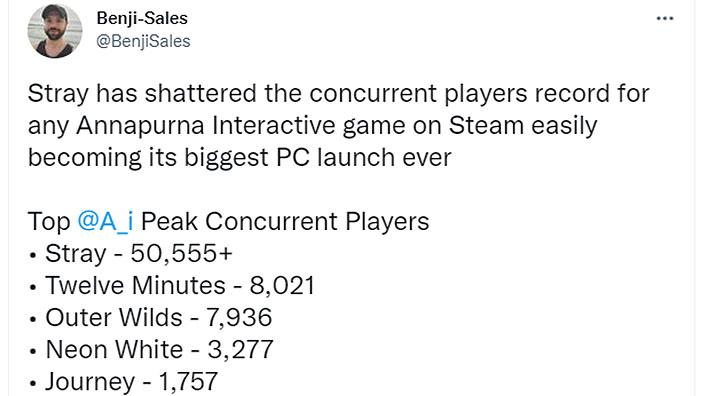 It's not even close, either. Twitter user @BenjiSales fetched some concurrent player peaks for some of the publisher's other titles, led by Twelve Minutes at 8,021 and followed by Outer Wilds at 7,936, Neon White at 3,277, and Journey at 1,757.
The combined total for those other games adds up to a collective peak of 20,991 Steam players, compared to 62,963 (so far) for Stray. That's the kind of result that will make a publisher and developer purr.