All of Intel's desktop Alder Lake CPUs so far have been unlocked K-series SKUs that are typically meant for power users and enthusiasts who may plan to overclock. As such, those don't ship with stock cooling solutions, the theory being buyers will want to use their own, higher-end coolers anyway. However, rumor has it there will be additional SKUs that do actually ship with a stock air cooler (as is always the case), and a leaked photo shows us what one of them may look like.
The photo was posted to Twitter by @momomo_us, an active leaker with a solid track history. It looks the same as the "Laminar RM1" cooler that showed up in a separate leak back in September, alongside two other versions ("Laminar RH1" and "Laminar RS1"). Assuming this is real, the stock RM1 cooling solution is likely to be bundled with retail Alder Lake-S processors with a 65W TDP.
There's not a lot of meat to the design of the RH1, as shown. It appears to be a low profile design with an LED ring for illumination, and angled plastic fins for added flair. We can also see the familiar plastic pushpins for securing the cooler to the motherboard. Proof will be in the pudding, as the saying goes, but at first glance it doesn't look like the kind of cooler that facilitates much overclocking. Which, to be fair, it's not designed for that anyway. 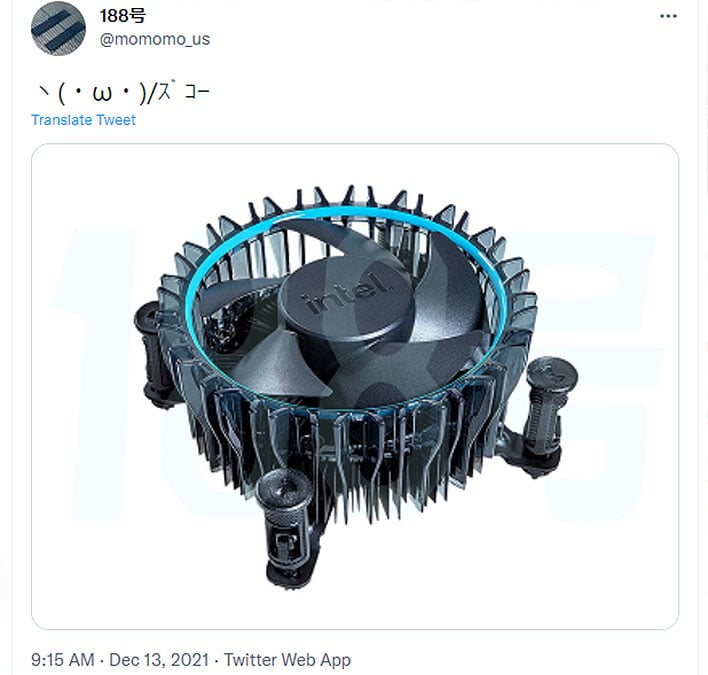 There's your shot of the supposed stock cooler in full view (above). Or you can click on the top image for an enlarged view, as the folks at Videocardz managed to get their hands on a higher resolution shot, which they also posted to Twitter. And it is within that Twitter thread that the reaction so far is mostly unenthusiastic.
"This think looks like it cost 5 bucks to make, lmfao," one user wrote. Another user suggested all of the money in R&D went to the light ring rather than the core part of the heatsink, while yet another said, "Excuse me, 2001 called and it wants its cooler back..."
There was one person who said it looks "beautiful," but that was followed by a crying-laughing emoji. So it's safe to say that, in the early going, people are not enthused. Or at least that's the case among the outspoken ones.
Of course, a heavy-duty cooler is not necessarily needed for lower wattage CPUs. Intel is expected to release 65W and 35W desktop chips based on Alder Lake and for those a stock cooler will at least be effective enough to keep the warranty intact. And of course users are still free to use a burlier third-party cooler, if they choose.
What are your thoughts on the supposed cooler design?