It has been right around nine months since Microsoft released Windows 11 to the public and during that time it has carved out a section of gamers, according to the latest Steam survey. Valve's monthly audit of Steam gamers shows that around one out of every five systems that tapped into the digital distribution service is running Windows 11.
Before we go any further with this analysis, let's talk about the survey itself. It's important to note that these monthly audits are not representative of every Steam user. As Valve notes, participation is optional (and anonymous), and it's not clear exactly how many systems it pings every month. Certain factors can skew the results too, like pinging internet cafes in China.
Nevertheless, these monthly surveys are probably the best ongoing snapshots of gaming trends, both in terms of hardware and software. Valve certainly takes them seriously, noting "the information gathered is incredibly helpful to use as we make decisions about what kinds of technology investments to make and products to offer." 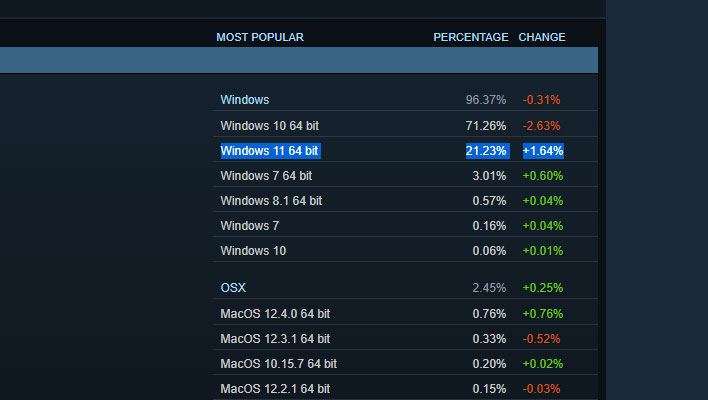 So, what are we looking at for the month of June? On the software side, Windows 11 (64-bit) gained some ground, increasing 1.64 percentage points to claim a 21.23 percent share Steam users who were surveyed. That's still a distant second to Windows 10, which sits at 71.32 percent (64-bit and 32-bit combined). But it's going up, and it's way ahead of the next closest OS, that being Windows 7 with 3.17 percent share (also 64-bit and 32-bit combined).
What this suggests is that gamers are migrating to Windows 11 faster than the general public at large. According to the most recent data by StatCounter, Windows 11 holds is installed on just under 11 percent of all PCs running Windows, versus Windows 7 at 11.54 percent (and Windows 10 at 73.45 percent).
It's not truly an apples-to-apples comparison because those numbers at StatCounter don't factor in Linux and macOS. But that would widen the gap anyway, further driving home the point that gamers are more prone to upgrade their PC to Windows 11 than a typical user. 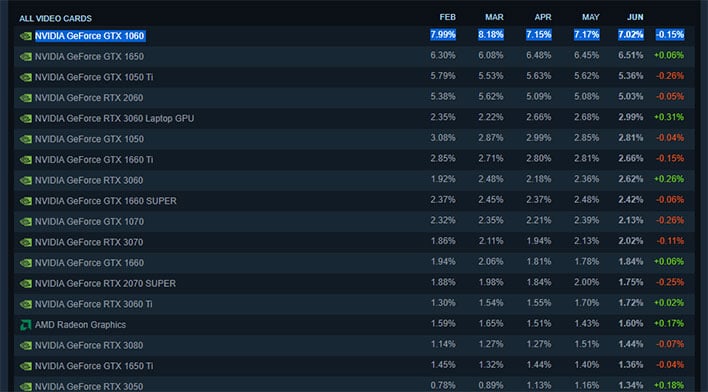 What's also interesting about the latest Steam survey data is more gamers are running a GeForce GTX 1060 graphics card than any other GPU. The GeForce GTX 1060 ended June with a 7.02 percent share of all GPUs pinged, followed by the GeForce GTX 1650 at 6.51 percent, the GeForce GTX 1050 Ti at 5.36 percent, and finally a GPU with dedicated ray-tracing hardware, the GeForce RTX 2060 at 5.03 percent.
We posted our GeForce GTX 1060 review on the same day it launched to retail six years ago. Those who bought one at the time are still using it have definitely gotten their money's worth. And in reality, it's still a decent GPU, albeit also a couple of generations behind and lacking fancy amenities that only RTX cards offer (Tensor cores and RT cores).
The RTX graphics chip from the current generation with the highest share is actually a mobile GPU, the GeForce RTX 3060 for laptops at 2.99 percent. Less than half of the top 20 GPUs are RTX models in Steam's latest hardware survey. it will be interesting to see if that changes in the next few months following a crypto crash that made GPUs more affordable and available again.