Summer can be stressful as an adult. Remember when you were a kid, and summer meant endless sleepovers, staying up all night playing games or watching films, and no responsibilities? These days, your own kids may be out of school, high temperatures mean rising power bills, and yet you've still got to get out there and work. Video games can make the perfect escape from all this, of course.

If you're anything like us, you probably already have a sizable backlog of Steam games waiting to be played, but maybe the fact that you haven't done so means that you were never that excited about playing them to begin with.

Well, Steam's Summer Sale is on, so perhaps it's time to pick up a new title or two to keep yourself engaged in your precious off hours. "But what game to get," you ask; "there are so many options!" Don't worry, we're here to point you to the biggest discounts and best deals...


We'll start off with some big discounts on some big-name titles. Cowboy action contemporary classic Red Dead Redemption 2 is as cheap as it's ever been at half-off. You should play this one if you haven't; it's a masterpiece. God of War (2018), the pride of PlayStation, is also as cheap as it's ever been at $40, and worth every penny. Horizon: Zero Dawn Complete Edition is just $25 for a whole lot of game. Also, the just-released Final Fantasy VII Remake: Intergrade is marked down from its normal price of $70 to just $49.69. If you're keen to pick that one up anytime soon, you might better do it now.

The entire Halo franchise is on sale for some very low prices, including just $16 for the Master Chief Collection that bundles up Halo 1-4, Reach, and ODST. Also on sale for less than a buck are the two top-down twin-stick Halo shooters, and for $5 you can pick up the underappreciated Halo Wars. Strategy fans can also enjoy deals on Civilization 6 (91% off at $15 for the Platinum collection with most DLCs) and Command & Conquer Remastered Collection, which includes revamped versions of the original C&C game as well as the first Red Alert title for just $7.

Lately we've seen an explosion of online co-op titles. One of the biggest co-op games lately has been indie darling Deep Rock Galactic, where a team of fantasy dwarves delve into asteroids looking for valuable minerals. You can pick it up right now for just $10. It Takes Two is an amazing game to play with a friend or spouse, and best of all, you only need one copy, even for online play; it's only $16. If you're disappointed in the lack of multiplayer in Bethesda's Starfield, maybe it's time to finally give No Man's Sky a shot. It's had numerous huge updates that have drastically improved the title since its disappointing launch; it's $30 right now.


We weren't thrilled with the title on its launch, but like No Man's Sky, first-person survival game Dying Light 2 has had numerous updates. It's down to $40. In a similar horror vein, you can grab the incredible Sekiro: Shadows Die Twice for $30 (lowest ever), or if you'd prefer to more anime with your third-person action horror experience, Code Vein is down to just $12. If you dig the Sekiro gameplay but not the feudal Japan setting, how about Jedi: Fallen Order? It's kinda short and easy, but it's surely worth just $10. We'd be remiss if we didn't point out that legendary action classic and fountain of memes Metal Gear Rising: Revengeance is down to just $7.50. 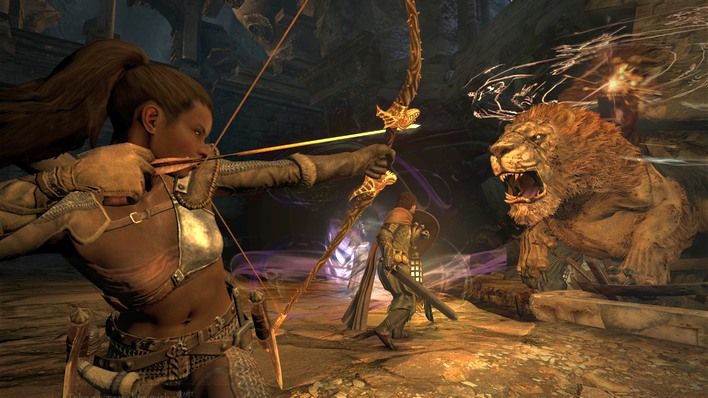 Dragon's Dogma: Dark Arisen is like Skyrim, minus immersion, plus fun combat.

Another beloved title from the same era as MGRR is Dragon's Dogma: Dark Arisen. You may have heard some hype recently as a sequel to this game was finally announced after a decade of waiting. You can find out why fans were hyped for just $5. Actually, developer Capcom is running a big sale on its games right now. The recent RE2 and RE3 Remake games are just $16 apiece, Monster Hunter titles are marked down to $15 and $31, and Street Fighter, Devil May Cry and Mega Man games are available for ridiculous discounts, too.

There are a ton of killer indie games on sale as well. Third-person co-op Rogue-lite Risk of Rain 2 is $20 with its expansion included. Mind-blowing bullet-time parkour shooter Severed Steel is only $15. If you heard everyone raving about Hades but skipped it, you can get in on the mythological mayhem for $15. Emotional 2D title Spiritfarer's "Farewell Edition" is just $10 and absolutely recommended.

Another gorgeous title that'll pull at your heartstrings is Ori and the Blind Forest; pick it up with its sequel for under $14. If that's too rich, you can get either the excellent overhead-view gun-porn Rogue-lite title Synthetik Ultimate or the beautiful turn-based board-game-card-game-hybrid Armello for just $5. If that's STILL too expensive, how about the hand-illustrated 2D action adventure game The Vagrant for under a buck? It's the closest thing we'll get to Muramasa: The Demon Blade on PC.

We've barely scratched the surface of the Steam sale here. If you see anything you can't live without, don't forget that most of these games are also for-sale and on-sale over at GOG, too. Of course, GOG also has a great selection of classic PC games on sale, too, so you can pick up old titles that you heard about or read about and never gave a shot, like perhaps Metal Gear Solid, Vampire the Masquerade: Bloodlines, or the original Diablo with its Hellfire expansion.

Let us know if you spot any great deals we missed here, or if you pick up anything!